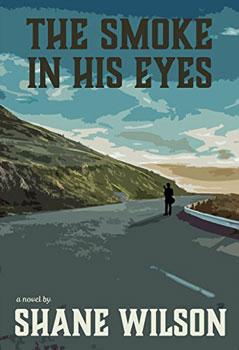 The oldest conveyor of human thought and emotion is storytelling. It manifests in art of all forms. From the symmetry of the Giza pyramids to the poetry of Maya Angelou to Kendrick Lamar’s lyrics, through and through, we somehow feel closer to humanity as art transforms and validates our existence. We know we need it, but how does inspiration for art come about? In the brain, the heart, the soul, the divine ... magic? This is the driving question of Shane Wilson’s new book, “The Smoke in His Eyes.” City Center Gallery & Books will host Wilson’s premiere North Carolina book reading event Thursday, June 28.

As a child, Wilson remembers how he fell into his imagination and conjured up stories. Now as an English teacher at Fayetteville Technical Community College, he has two novelsunder his belt. The latest book saw its publication release by GenZ Publishing on May 18.

“The Smoke in His Eyes” tells the tale of musicians. TJ is haunted by a mysterious and traumatic childhood event that rears its ugly head in visions. Muna, who appears as ethereal smoke, attempts to help him understand the nature of his visions.

“The book explores both of their individual reasons for creating art and their inspirations for it,” said Wilson.

Much like his first novel, “Smoke in His Eyes” falls into the magical realism genre. But the story holds fast to real-world actions and emotions. According to Wilson, the book is very much a North Carolina book. An entire section is even devoted to seeing the protagonist in the Appalachian Mountains.

The surreal elements of the narrative, in turn, heighten the mysterious events of everyday life.

“The best parts of life are the parts we have a hard time explaining,” said Wilson. “That’s what I would consider the magic of life, so I just like to dial that up when I write fiction. As adults, we’ve lost that sense of wonder a little bit. But there’s something in people that still likes fantasy, that escapism.”

Magic is just another word for inspiration, in Wilson’s words. After writing his first novel, his anxiety was, quite simply, having no new story to write. No inspiration to tap.

One line sums up Wilson’s fear: You’re going to have to figure out what you’re going to write about when you’ve run out of stories to tell.

Wilson’s fascination with the origins of inspiration ended up fueling the themes of his second novel.

“The Smoke in His Eyes” contemplates the role of inspiration in music. The main character is a guitarist. In fact, Wilson learned to play the guitar for this novel and even wrote the original songs featured in the book.

His dedication to craft reveals itself also in his upcoming book reading at City Center Gallery & Books. According to him, the reading would be disingenuous without music.

“The talks are going to be like a VH-1 storytelling situation where I’ll read a little bit and talk about it and then I’ll play a song,” said Wilson. “I think it’s an interesting wrinkle or spin on the old classic book reading.”

Wilson hopes the discussions at the book reading pivot toward the intersections of the different arts and how those arts help us make sense of our own lives.

“(My) book is for somebody,” Wilson said. “It’s just that those people have to find it, and readings give me an opportunity to do that. I love to talk about art, really. It’s less about talking about my own stuff than it is talking about books. It’s really exciting.”