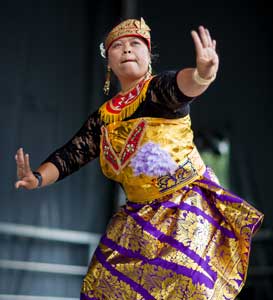 In the late 1970s, John Malzone was asked to plan a parade for a local festival that would celebrate the many ethnic and cultural groups that make up Fayetteville’s community. He did so, and he also emceed the festival hosting the parade. That event was Fayetteville’s very first International Folk Festival; it was 1978. In a few weeks, Sept. 28-30, the IFF will cel­ebrate its 40th anniversary in downtown Fayetteville – and Malzone will return as emcee. He’s never missed a year since doing it for the inaugural event.

This year’s 3-day celebration kicks off with the Arts Council’s Bon Temps Ball on Friday from 7-9 p.m. Terrance Simien & The Zydeco Experience, a Grammy-winning musical group, will bring the spirit of New Orleans-style Mardi Gras onstage at the intersection of Hay Street and Ray Avenue. Simien’s band will also perform Saturday at 1:15 p.m. and 3:45 p.m.

The parade Malzone created all those years ago, which is today known as the Parade of Nations, takes place Saturday morning at 10:30 a.m. on Hay Street. Local people will proudly represent more than 30 countries or cultures, wearing traditional clothing and costumes and sometimes playing instruments.

One local who will play an instrument – bagpipes, to be specific – is Jackie Morgan. “When I first came to America, I didn’t think I’d ever see a Scottish flag again,” said Morgan, who immigrated to the U.S. as a young adult. “Then I came to Fayetteville, and I was walking downtown (during the IFF) and I saw (a Scottish flag), and I was like woah! I got excited. And so I’ve been a part of (the IFF) ever since.”

Saturday at 2:30 and 5 p.m., Canadian band Mélisande [électrotrad] will bring centuries-old Quebecois songs to the Festival Park stage. There’s a twist hinted at in the group’s name, though. Mélisande uses electronic instruments, pulsing drums, fiddle, flute, jaw harp, banjo and bass to create a new sound for the traditional tunes.

At 6:30 p.m. Saturday, the 11-piece Williamsburg Salsa Orchestra will serenade the Festival Park stage crowd with swelling, sultry covers of Indie rock tunes, from Arcade Fire to M83 to the Black Keys.

Immediately following their performance, the IFF will see its first fireworks, sponsored by Hale Artificier.

Mélisande [électrotrad] will play again to finish the IFF at 1:30 p.m. Sunday.

Throughout the weekend, visitors can also enjoy the International Cafe, storytellers, more than 50 arts and crafts vendors, a mime, a jug­gler and more.