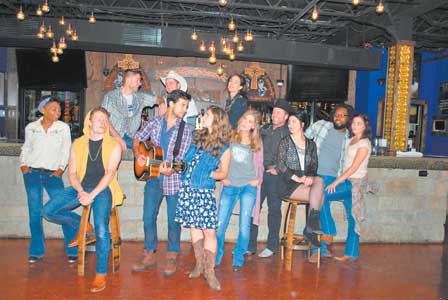 With “Music City,” Cape Fear Regional Theatre proves once again that audiences don’t have to travel far to get top-notch entertainment in Fayetteville. The season opener delivers a fun show full of song and dance, with a talented cast and crew.

Written by Peter Zinn with music and lyrics by J.T. Harding, the show is directed by CFRT Artistic Director Mary Kate Burke.

Set in 2000, “Music City” is the story of brothers TJ and Drew (Dez Duron and Jonathan Judge-Russo), who perform every Friday night at the Wicked Tickle bar, working hard to become the next Nashville sensa-tion. Eager to make enough money for a demo recording for a record producer, they make some bad choices and become indebted to a local drug dealer.

When the brothers meet a young singer named 23 (Kaylyn Marie Scardefield) at open mic night, TJ falls head over heels, and the trio form a group they call Dickerson Pike. TJ joins the National Guard to earn money to repay the drug dealer. Then, just as Dickerson Pike is on the edge of reaching their dreams, the attacks of 9-11 happen and TJ is deployed overseas.

“Music City” is a love story, but it also navigates the challenges faced when trying to protect, and eventu-ally forgive, loved ones battling their own demons. From beginning to end, “Music City” is a good time, even when your heart is breaking for the characters.

Burke rounded up some incredi-ble talent for this production. These folks could be singing the recipe for gravy and biscuits and it would sound fantastic. There is twang, to be sure, but it is fun, unique and utterly amazing.

If you are not a big country music fan, not to worry. The lyrics and music so superbly support the story, it doesn’t matter which genre they come from. Although Harding’s hits have been recorded by the likes of Kenny Chesney, Keith Urban and Blake Shelton, the performances in “Music City” rival even those coun-try music icons.

There were crowd pleasers that got feet tapping and hands clapping like “Y’allsome,” “Friday Night,” and “We Are Young.” Also included were “Somewhere with You,” “Sangria” and “Different for Girls.”

Duron and Scardefield brought down the house with “Smile.” The heartbreaking “For This Town” sung by Catherine Porter, playing 23’s mother Tammy, was perhaps the most emotionally powerful tune in the show.

Director Burke brought in Emmy-winner Tyce Diorio of “So You Think You Can Dance” fame as choreog-rapher. Diorio’s work is fresh, ener-getic, artistic and full of emotion. The choreography is a character all its own in “Music City.” The beauti-ful and at times sentimental shadow ballet of “Somewhere in my Car” was a highlight of the show for me.

“Music City” runs through Oct. 7. There are a few scenes with strong language and drug use. For more information, visit www.cfrt.org or call 910-323-4233.