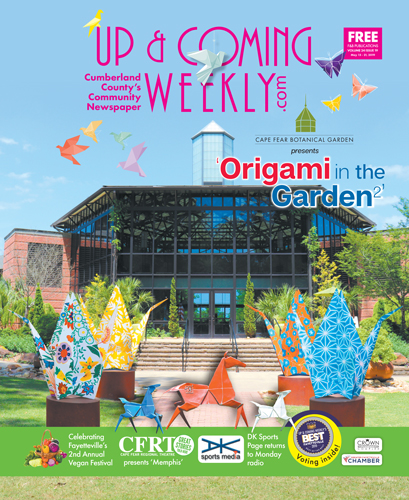 “Origami in the Garden2” opened at Cape Fear Botanical Garden May 5 and runs through Sept. 8. As the name implies, the metal sculptures in this exhibit are inspired by the Japanese art of folding paper. Husband and wife team Kevin and Jennifer Box created the exhibit, which includes original works by Kevin as well as his collaborative works with renowned origami artists Te Jui Fu, Beth Johnson, Michael G. LaFosse and Robert J. Lang.

The exhibit includes an audio tour and an explanatory sign accompanying each piece. As patrons stroll the garden, they can make a call on their cell phone, enter the artwork number and hear a recording of Kevin explaining the story of the art. “A lot of times, art is beautiful, but we have done a lot of work to answer the ‘why’ and give people access to that,” Kevin said.

There are 17 displays and 20 sculptures that make up the exhibit. The metal sculptures were made using a combination of the 6,000-year-old art of wax casting and the 2,000-year-old-art of paper making. “I pioneered a technique that combines the two processes,” Kevin said. “It makes paper more durable and bronze more light. It’s a 35-step, 12-week process.”

Several years ago, as he was working at a foundry and trying to develop his voice as an artist, Kevin started playing with the art of wax casting. “When you are working in an old art form, there is a lot that has been done,” Kevin said. “I wanted to tell a different story that would remind us of the same stories that have been told for thousands of years and address the challenge of how we navigate life and what decisions we are going to make.”

Kevin said what drew him to origami was different than the appeal for many people. “I found it to be a simple metaphor and reflection of an ancient philosophy called tabula rasa,” he said. “The philosopher Aristotle started it. The idea is that we begin with a blank slate. When I was studying that in history, I think of it as the blank page because it captures the creative challenge we all face — whether you are a writer, a painter, a mathematician. What do we do with blankness? How do we create something out of nothing?”

He started working on projects that started with a square piece of paper — because his last name is Box. He used that as a way to try and capture what he envisioned the human soul to look like. His first signature pieces looked like snowflakes. Because he was already working at the foundry, he started working on a way to combine paper and metal.

Kevin began to make bronze sculptures and patina the bronze white, transforming it into the look of paper. People reacted saying that it looked like origami. Kevin rejected that idea at first. But later, a friend gave him a book titled “One Thousand Paper Cranes.” Kevin decided to make an origami crane. After folding and then unfolding the crane, he had an epiphany. “In every origami design, the paper remembers all the creases that you’ve made,” he said. “It revealed this star pattern, and it looked like a snowflake, which was similar to what I was already pursuing. It is like origami on the inside — like the architecture of the soul.”

Kevin works in his studio near Santa Fe, New Mexico. The 35-acre property sits among spring-fed wetlands and beautiful rock formations. The studio is designed around an Earth-friendly philosophy, embracing the reduce, reuse, recycle method not only for creating but for caring for the land and its resources.

Kevin’s wife, Jennifer, has an education background, so finding ways to engage and inform audiences is a priority as well. “We are conservation- minded artists,” said Kevin. “And my wife has a master’s in education. She heard the stories I was telling and realized that if we organized the content and interpretation, there was a lot of educational programming there.

“As we traveled with the show across the country, we discovered that botanical gardens have educational departments and resources. They are places people go to rest and to learn. And sometimes the best place to learn is when you are at rest. So, we have collaborated, and things come together where we work with gardens that can educate, enlighten, enhance and inspire a lot of (people in regard to) our subject matter. And we were inspired by how generous botanical gardens are to their communities.”

Jennifer reached out to CFBG not long after Hurricane Florence hit in 2018. She was hoping to partner with the Garden. Although CFBG wanted to host the exhibit, damage from Florence made the cost of hosting it prohibitive. “Here was a garden that needed help; Jen had two choices,” Kevin said. “She could have said, ‘Oh, they can’t do this. I will stop calling.’ But her second choice was hearing that and thinking how can we work with them in a different way.” This innovative thinking led Kevin and Jennifer to start a scholarship program for gardens.

“The exhibit is here because we applied for their scholarship program after we suffered so much damage from Hurricanes Florence and Mathew,” said CFBG Marketing Manager Taryn Renz. “While the exhibit is here, the Garden will have special programing that relates to the exhibit — like an Ikebana class on May 18, which is Japanese floral arranging.”

While there are still areas of the Garden that need work, Kevin said he hopes the exhibit will bring plenty of visitors to not only enjoy the garden but to learn how they can help it flourish.

“We’re really excited to have the exhibit here,” said Renz. “Exhibits like these give visitors a reason to keep coming back. It’s the perfect time to become a Garden member — so you can keep coming back for events and programs all summer.”

Find out more about the exhibit, CFBG and its programming at www.capefearbg.org. Learn more about Kevin and Jennifer Box and their work at https://outsidetheboxstudio.com. “Origami in the Garden2” runs through Sept. 8.