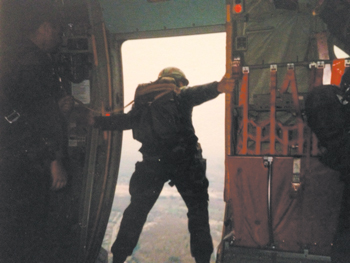 In 1784, after seeing the first successful hot air balloon flight, Benjamin Franklin envisioned the United States having a military force that could drop from the sky. Fast forward to Aug. 16, 1940, and the U.S. Army successfully conducted its first official parachute jump. It was the birth of the “airborne.”

Here are a few things that you may not know about airborne units and paratroopers.

Airborne units may or may not perform parachute operations. Some units keep their Airborne designation because of their historical past. Some units that do conduct airborne operations may not have the word “Airborne” in the unit’s name.

Paratroopers are looked upon with great honor and respect. Those who choose to volunteer to attend Airborne school take on an enormous amount of risk. The training is among some of the hardest training in the military, both physically and mentally. Upon completing training, the student is awarded the Basic Parachute Badge.

A static-line paratrooper has completed the basic parachute school and has been awarded the coveted Basic Parachutist Badge.

For those seeking more significant responsibilities, they can attend the “Jumpmaster” course. Not to be confused with the Jumpmaster Badge.  At the Jumpmaster Course, students learn the complexities of being responsible for all aspects of a jump — to include combat equipment, airborne and drop zone operations. Once completing the Jumpmaster Course and additional requirements, a paratrooper that has graduated the Jumpmaster course can earn their Senior or Master Parachutist Badge.

The Military Freefall Parachute Badge is earned for completing the Military Freefall school. The Freefall badge is a separate badge from the parachute badge. Like the static-line Jumpmaster, Freefall has its own Freefall Jump Master Course. This badge is distinguished by a star and wreath at the top of the badge.

If you see a paratrooper with a bronze star on their wings, they have parachuted into a combat zone.

For more history about Airborne or National Airborne day, visit the Airborne and Special Operations Museum, or visit https://www.asomf.org/.