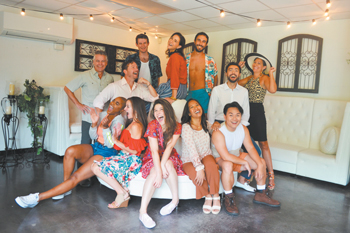 Get ready to have those upbeat ABBA disco ditties rollicking around in your head once again as Cape Fear Regional Theater brings “Mamma Mia!” to town … with a twist. Opening Sept. 12, and running through Oct. 6, the production promises to be a party for all. With music and lyrics by Bjorn Ulvaeus and Benny Andersson and the book by Catherine Johnson, “Mamma Mia!” will be directed by Suzanne Agins and choreographed by Ryan Migge.

Audiences can look forward to a few twists — and some bonus content — in CFRT’s production of the story of a soon-to-be-married 20-year-old who writes to three men from her mother’s past, inviting them to her wedding to find out which one is her father. “When ‘Mamma Mia!’ was first performed in 1999, 20 years ago was the 70s,” said Agins. “Twenty years ago now is the 90s.”

This will be Agins’ third time directing a CFRT production, having previously directed “Dreamgirls” and “Memphis.” “It is such a joy to form these relationships over time,” Agins said of her experience working with CFRT casts, which also include many local actors and actresses.

Migge is a self-styled “Cape Fear virgin” as this will be his first time choreographing a CFRT production. “I am especially excited to be teaching Waterloo,” Migge said, referring to Megamix Night Sept. 9, from 6-7 p.m., when theatergoers will have the opportunity pre-show to learn the choreography for the show’s finale so that they can “dance in the aisles with the cast.”

“We are bringing back the onstage bar featured in ‘Music City,’” said Agins. “It was such an immersive experience with the audience, which made the energy level so high, and it carried over to the show.”

Joanne Javien will play Donna, the bride’s mother. She studied opera in college in New York and has been acting for over 15 years. Nicki Hart will play Rosie, Donna’s friend. Hart came to Fayetteville as a military spouse in 2000 and has appeared in CFRT productions ever since, her most recent appearance being in “Music City.” Heather Setzler will play Tanya, another friend of Donna’s. Although she worked in TV news for 20 years and has appeared in Wilmington and Raleigh theater, this will be her first appearance on the CFRT stage.

Sarah Harris, costume designer for “Annie,” will design the set for “Mamma Mia!” Costumes will be designed by Claudia Stephens, who was CFRT Artistic Director Mary Kate Burke’s professor at Southern Methodist University and previously designed the costumes for “Sense and Sensibility.” Costume associate, Janice Rabian will assist Stephens. Zeke Smith will direct the same band of local musicians who played for last season’s “Memphis.”

In addition to Megamix Night, there will be other events associated with “Mamma Mia!” For Greek Night on Sept. 12, from 6:30-7:15 p.m., patrons are encouraged to wear their letters and enjoy complimentary wine tasting before the show. For 70s Night, on Sept. 13 and 27, from 6:30-7:15 p.m., come dressed in 70s attire and enjoy the onstage bar and some groovy tunes. Opening Night Dance Party takes place on Sept. 14, beginning after the show at 10 p.m. Sept. 18 is Military Appreciation Night and Sept. 20 is Teacher Appreciation Night; both feature a 25% ticket discount with appropriate ID.