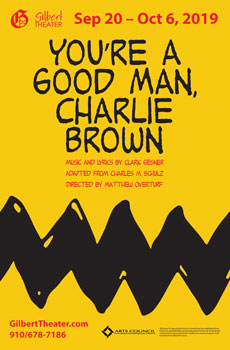 The Peanuts characters come to life in Clark Gesner’s adaptation of Charles M. Schultz’s classic comic strip in the musical, “You’re A Good Man, Charlie Brown.” Audiences will enjoy the regular Peanuts storyline with the ever-bossy Lucy, who is still trying to get Schroeder’s attention regardless of whether or not he notices her. Then there’s Sally who’s still picking on her crush, Linus, who of course doesn’t go anywhere without his blanket. And finally, there’s Snoopy and Charlie Brown. Snoopy still has his doghouse and still lives out his dream of being the Red Baron, and Charlie Brown is, well, his lovable self. And they will all be at Gilbert Theater Sept. 20-Oct.6.

The role of Sally Brown is played by Caryn Festa. When asked why she wanted to audition, she said, “I haven’t been on the stage since high school, and I love performing.” She was ecstatic to learn she got the role of Sally. She is grateful for the support of her family and hopes everyone that comes to the show thoroughly enjoys it!
The role of Linus is played by Quentin King. King has played in multiple performances at the Gilbert. Being in this musical reminds him of his childhood and how he used to watch the cartoons and read the comics. It’s definitely nostalgic. He thanks his family for their never-ending love and support.
Lucy is played by Jennifer Czechowski. Jennifer has been a part of Gilbert productions in the past, and with the encouragement of her mom, husband and best friend, she decided to audition for this musical. It’s family friendly and fun.

Gage Long plays the Schroeder. Long is thrilled to be in this production because it’s fun and the cast is great. He’s excited to bring the character of Schroeder to life.

LeeAnn Valcarcel plays Snoopy. Valcarcel said this has been her favorite show for a long time. It was the first musical she put on at Fayetteville Academy, where she is the choir director. “This show has a bright spot, and I hope the audience experiences that when they watch it,” she said.
Valcarcel is grateful for the support she receives from her family and friends, especially her children.
Dan Follett is Charlie Brown. Follett is a freshman at Fayetteville State University and has been a fan of this show for as long as he can remember. He feels he is growing as a performer, and he loves his fellow cast members, plus the amazing directing team. He wants the audience to know that this show has a wonderful message about happiness. “That even when life is particularly hard, you can find happiness in the simple things that surround you,” Follett said.

The production of “You’re a Good Man, Charlie Brown” runs Sept. 20-Oct. 6. Ticket prices range from $14 to $16, or $10 with groups of 10 or more. Visit www.gilberttheater.com for tickets and information.