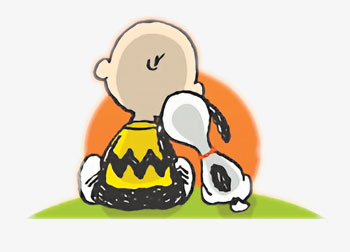 The Gilbert Theater opened the 2019-2020 season with “You’re a Good Man, Charlie Brown,” based on the comic strip “Peanuts” by Charles M. Schulz. The show, which launched its 26th season, brings the familiar fun of Charlie Brown and his friends to a new audience, while thrilling the inner child of older audience members with a nostalgic trip down memory lane. The show runs through Oct. 6.
Linda Flynn, the stage designer, kept things simple with a sunny background, reminiscent of the original comic look. The actors carry the few props they use in and out of each scene as necessary. But they didn’t skimp on tradition. Schroeder’s piano, Lucy’s psychiatric advice booth and Linus’s blanket all feature prominently throughout the play.
The production also stayed close to tradition with the costumes. Lucy is in a blue dress, Sally wears pink and Charlie Brown is unmistakable in his iconic yellow tee shirt with brown zig zags. Their characters are as familiar as a childhood friend.
The cast dazzled the audience. 18-year-old Dan Follett was irresistible as Charlie Brown. He plays the anxiety-ridden character perfectly and has the audience in tears as he pines for the ‘red-head girl’ from beneath a brown paper bag.
Jennifer Czechowski is the delightfully bossy, Lucy. She bounces back and forth between know-it-all psychologist and lovestruck schoolgirl pining away for Schroeder with ease.
Gage Long plays Schroeder, the tortured artist who’s more infatuated with Beethoven’s “Fur Elise” than Lucy’s attention-seeking moves. His character seems hopelessly out of place when he’s not banging on his beloved keyboard.
Caryn Festa plays Sally. Her platinum ringlets and fluffy pink dress notwithstanding, she’s the most adult-like character in the bunch with an innate ability to manipulate everyone from the teacher to Snoopy.
LeeAnn Valcarcel is Snoopy, America’s most beloved pet. Whether she’s lounging on top of the doghouse or chasing rabbits with Sally, she’s delightfully sarcastic and always manages to appear cooler than the humans.
And finally, Quentin King steals the show as Linus. His lispy line delivery juxtaposed with his four-syllable dialogue were charming. Who else could deliver a five-minute dissertation on the psychological similarities between a security blanket and an adult’s hobby? And he truly believes he can walk away. “It’s a cozy sanctuary but it’s far from necessary, ‘Cause I’m just as self-reliant as before. As a simple demonstration of my independent station, I will go and leave my blanket on the floor.” Until he realizes he can’t.
The entire cast warbles through each song, slightly off key but with the enthusiasm only a school-aged child could deliver. And they bounce from one scene to another, staying only long enough to remind you of some long-forgotten conversation, maybe on the playground or in your best friend’s back yard. And then they’re off again, bouncing around your childhood memories and hitting all the hot spots.
For more information and to purchase tickets visit www.GilbertTheater.com.
How to resolve AdBlock issue?
X