A parade that celebrates the community: The Harvest Train 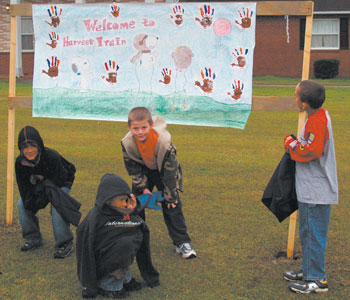 Falcon Children’s Home & Family Services’ annual Harvest Train Parade and program is back again this year with the first showing of the program on Saturday, Nov. 23, and the regular program and parade on the Tuesday before Thanksgiving, Nov. 26.

In 1949, the Falcon Children’s Home’s doors almost closed for good. “They couldn’t get funding, they couldn’t get food, they had a difficult time meeting their needs,” said Joseph Leggett, the chief executive officer and superintendent of the home.

But the home, whose slogan is “where love makes the difference,” was determined to stay afloat. With the help of churches of the International Pentacostal Holiness church, women’s auxiliary and ministry groups and the director at that time, the home invited the community to come to an event and bring various commodities. “The first letter said, ‘Bring your ham hocks, bring your collard greens.’ Those kinds of things. ‘And we’ll do a program to say thank you,’” said Leggett. The event was initially called the Santa Claus Train, and in the 50s, it was renamed the Harvest Train Parade and program.

As many people are involved in the event and support the children’s home, in past years, little time was left over with all of the festivities to thank everyone who supported the home.

Additionally, because Tuesday is a work day and many people already have Wednesday, Thursday and Friday off of work for Thanksgiving, not everyone who wanted to come to the usual event on Tuesday could. Leggett hopes that people who have wanted to attend in prior years but haven’t been able to, can attend the Saturday night program. 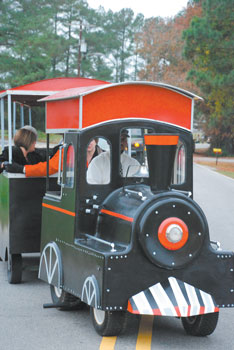 The program isn’t just a play; it’s a full-blown production, complete with music and a choir, dancing and acting. Buck Hodge, the minister of music at Northwood Temple, wrote the program. Kids and staff at Falcon Children’s Home start preparing for the event in early September.

The story might feel familiar to some —  particularly to attendees from the Eastover area — because the story is true. It is about J.P. Patterson, who sponsored a child at Falcon Children’s Home’s Christmas event that they have at a Round-A-Bout Skating Center every year. The story tells how Patterson got involved and of the friendship he had with one of the boys, Prince. Tragically, Patterson died in a hunting accident a couple of years ago. Ever since, his friends have put on a golf tournament each spring to support the home. Prince, the young man that J.P. supported for all of those years, is an adult now and a graduate of Fayetteville State University. Prince and Patterson’s family will be at the program.

“You will laugh and you will cry,” said Leggett. “And there’s no cost to you.”

Founded in 1908, Falcon Children’s Home has been serving children in the community for over a century. “We’ve estimated that in that time, we’ve either directly or indirectly touched 20,000 children’s lives,” Leggett said. In addition to the residential children’s home, Falcon offers a variety of services.

“We’ve gone from being a residential children’s home to having a mothers and babies program, a maternity program, foster homes, an adoption agency,” Legget explained. “We also have a transitional living program in an apartment-like setting that teaches valuable life skills like cooking, cleaning and balancing a checkbook, for instance.”

The staff at Falcon saw how the children struggled with transitioning to different schools, so Falcon also has its own private school on campus, too.

“What I try to tell our staff is, ‘If a problem affects the young people and we could do something to make a dent in that or to help in that situation, we need to try to develop a program that can do that,’” Leggett said.

As the old saying goes, it takes a village to raise a child. Leggett agrees. “We are only as good as the community we serve,” he said.

There are over 10,000 foster children in North Carolina. There are over 1,000 in Cumberland County. With that being the case, Falcon tirelessly works to help the children throughout the state. They have even opened a second Falcon Children’s Home in Turbeville, South Carolina.

With new legislation coming to North Carolina, the home may see new challenges. The Family First Prevention Services Act will only pay for children to be in group homes for two weeks, unless they are 18 years of age, have been caught in sexual trafficking or are mothers with babies. Although Falcon Children’s Home has high standards for how it runs and is certified and licensed by the state, it, along with other homes, would be affected by the legislation. Since some of the children are 18 and Falcon has a program for mothers and babies, not all children would be affected, but Falcon is working with the state on alternative legislation for programs that would be affected, as well as other group homes that fill important needs in North Carolina communities.

The continued support of community donors and volunteers is a great help to the home. Whether a person is offering to mentor or tutor a child, help with projects on campus with skills like painting or carpentry or even donating commodities, the effort of supporters is invaluable.

“It means a lot to the students at Falcon Children’s Home to see that people care because a lot of times, they feel like people don’t. A lot of times they don’t think we care and say, ‘Oh, you get paid to take care of us. This isn’t real.’ So when they see people who give of themselves, just to be giving their time, it means a lot,” Leggett said.

Picture 1: Falcon Children’s Home has been serving children in the community for over a century.

Picture 2: The Harvest Train Parade and Program will have an extra night this year to say “thank you” to the community.