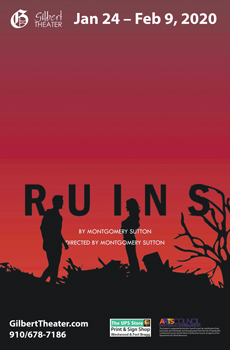 When natural disasters strike Fayetteville, our community often becomes poignant, reflecting on prior disasters and our relationships with each other.  Montgomery Sutton’s “Ruins,” opening on Jan. 24 at Gilbert Theater, asks the questions, What is the past? And when we look on the past, what are we really looking back on?

The production is a romantic tragic comedy set in the wake of a horrific natural disaster in Tornado Alley, where two lovers who haven’t seen each other in a decade are reunited in the wake of that tragedy. “Over the course of 90 minutes, they relive moments from their pasts that shed light on the past 10 years. Each of them realizes that actions and events from the past they remember may not exist in the same way they think for the other person,” Sutton explained.

A short play was the origin of the production almost a decade ago. For Sutton, the play was inspired by personal events in his life, which spurred the evolution of the work.  He is oiginally from Dallas, Texas, and since he began the writing of the play, there have been two major natural disasters in the area — tornadoes. “And then of course, in my personal life, there have been all kinds of personal and romantic relationships that have come and gone that have elevated me and also erupted and dissolved. The play has very much become an exploration of what heightened moments of tragedy in life can inspire in our own personal spheres,” he said.

He wanted to explore the nostalgia of events that we recall and question whether or not the memories we are recalling might, in fact, be fiction.

Larry Carlisle III, the artistic director at Gilbert Theater is excited to see the show on stage. “This is the first time that it’s been produced anywhere, so no one has ever seen it on a stage before. We, at the Gilbert — that’s kind of part of our mission to present lesser-known and sometimes previously unpublished or unproduced works.”

Since the show takes place in the wake of a tornado, the set reflects that. “The technical director and main builder of the set really outdid herself on this one,” Carlisle said.

The cast is small, featuring new and familiar faces. Adam Smith is played by Justin Toyer. Grace Carson is played by Megan Martinez. The last character is a tree removal expert named Mr. Green, played by Michael Carney. Carney and Toyer are Gilbert veterans, but the show will be Martinez’s first time performing on the Gilbert stage.

Sutton was an actor in Cape Fear Regional Theater’s “Henry V” in 2016. At Gilbert Theater, he wrote a new adaptation and directed “Antigone” two years ago.

Sutton’s favorite part of the production is the inventive way that the cast performs the transitions in time throughout the production. Being in one space and with one audience, the production “changes the trope of this flashback into something that is very unique … and creates an experience that becomes slightly experimental in the way it looks at how our memories affect our actions in the present,” said Sutton.

“Ruins” opens on Jan. 24 and runs through Feb. 9. Tickets can be purchased online at https://www.gilberttheater.com/ or by calling 910-678-7186. Tickets are $16 and specially priced tickets for seniors 55 and up, military, students and first responders are available for $14.