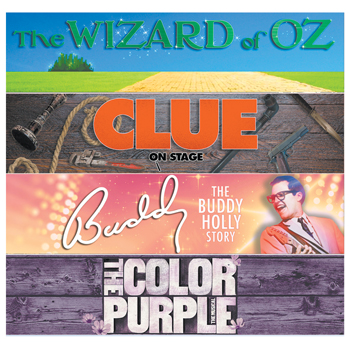 After closing its doors to audience members back in March, the Cape Fear Regional Theatre spent the last 6 months innovating and leading the way for regional theaters during the pandemic.

One of the first to create daily online programming for kids, CFRT launched virtual Edutainment classes that offered daily lessons for students in grades K-5. After 9 weeks of online classes, CFRT opened its doors for 15 sessions of summer camps between June and August, following CDC guidelines for in-person camps and ultimately reaching almost 200 campers.

In September, CFRT announced the receipt of a $225,000 Community Organization Resource grant from the Arts Council of Fayetteville/Cumberland County, Inc. for the 2020-2021 Season.

"We are so honored to receive this grant from the Arts Council. This funding will allow us to continue producing high quality productions and serving parents and children adapting to this new paradigm. We know how essential art is to healing and processing, and we look forward to another year of creatively engaging with our community,” said Ella Wrenn, CFRT’s managing director.
CFRT is committed to presenting an annual series of plays, performances, and special events that, in addition to entertaining, will enlighten, inspire, and educate performers and audiences.

"We are proud of the work we’ve done throughout the last year to continue to provide the award-winning productions and nationally recognized education initiatives, and we could not have this impact without the tireless advocacy and support of the Arts Council,” said Artistic Director Mary Catherine Burke.

Just last week, CFRT returned to in-person productions with “Lady Day at Emerson’s Bar & Grill.” The show is being performed outside, right down the block from CFRT behind Haymount Auto Repair. Extensive safety procedures are in place for these performances. Audiences will be limited to fewer than 50 people in accordance with state COVID-19 guidelines. Seating will be in six-foot distanced pods of two or four. Masks will be required of all audience members, and temperatures will be checked at the entrance. Robust sanitation will take place between performances and the show will be as low contact as possible with digital programs and no paper tickets.

The rest of the 2020-2021 season will be performed in the spring. Dates for those shows will be announced later in the year.

The Wizard of Oz
Click your heels together and join Scarecrow, Tin Man, Lion, Dorothy, and her little dog, too. They’re off to see the Wizard in the magical land of Oz, but in order to make it there, they have to face the Wicked Witch of the West. This iconic musical reminds us that there truly is no place like home. Join us for this beloved family friendly musical that has entertained generations.
The show is by L. Frank Baum and adapted by John Kane for the Royal Shakespeare Company. It is based upon the classic motion picture. It is rated G for everyone.

Clue: On Stage
It’s a dark and stormy night, and the host of a dinner party has turned up dead in his own mansion. Inspired by the board game and film, join Miss Scarlett, Colonel Mustard, Professor Plum, and other colorful guests for this hilarious murder mystery. As the guests race to find the killer, audiences will be in stitches to try and figure out who did it, where, and with what.
Rated PG for parental guidance, this play contains mild and comedic themes of violence. It is based on the screenplay by Jonathan Lynn, the motion picture and the board game “Clue.”

Buddy: The Buddy Holly Story
Before the Beatles, there was Buddy Holly and the Crickets. It’s the 1950’s and a young man from Texas with big glasses and an even bigger dream of catapulting to the top of the Rock and Roll charts. With classic songs like “Peggy Sue,” and “That’ll Be The Day,” along with “La Bamba,” this high octane musical is a celebration of a man whose music and values were ahead of his time.
The show is rated PG for parental guidance and contains some mild adult themes. It is written by Alan Janes.

The Color Purple
Based on Alice Walker’s Pulitzer Prize-winning novel, this landmark musical is about a remarkable woman named Celie. All she knows is heartbreak and despair, until her friend Shug helps her realize her own self-worth. Celie uses her flair for fashion to build a better future. With a joyous score featuring jazz, gospel, blues, and African music, it is a story of resilience and a testament to the healing power of love.
The show is rated M for mature audiences, it contains some language and adult themes.Based upon the Pulitzer Prize-winning novel written by Alice Walker and the motion picture.