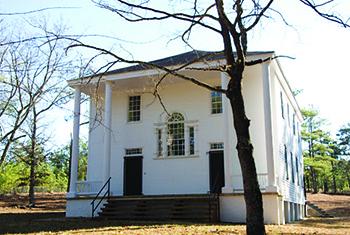 The landscape of what is now Fort Bragg looked very different just over 100 years ago when the War Department purchased it.

It was once a thriving community of Highland Scot immigrants.

A glimpse of this past remains at Long Street Presbyterian Church, the oldest standing structure on Fort Bragg, constructed as a place of worship for this long-ago community in 1847.

It is listed on the National Register of Historic Places, and in the adjacent cemetery, the oldest readable marker dates to 1773.

When the War Department purchased the land, some six acres, the church, the cemetery and the adjacent school in 1923, the community was granted a handshake agreement.
This agreement granted the heritage families the ability to maintain their connection with the landscape and the ancestors laid to rest on the grounds.

The War Department committed to not moving any of the existing burials and assumed the stewardship for these cemeteries.
The last internment, dated 1932, reflects the War Department’s handshake agreement in continuing to allow heritage families access to the church and cemetery.

According to Fort Bragg Cultural Resources Management Program Archaeologist and Curator Linda Carnes-McNaughton, McFadyen family descendants held annual gatherings at the church during the mid-1950s to 1960s, in the 1970s to 1980s other heritage families joined in the reunions.

In 1995 the Fort Bragg CRMP office was created. With the addition of the program, Fort Bragg was able to allow families access to the grounds for worship and support the event. Since 1995 the Garrison Chaplain’s office has provided additional support for the family reunions, and CRMP has provided access to the church grounds and helped coordinate the gatherings.

The modern iteration, with a two-year pandemic hiatus, sees attendance of upwards of 120 heritage family members, soldiers and members of the public.
Each summer the families gather and worship in the same pews as their ancestors alongside any who choose to come and join them.

Military members and the public are invited to participate in this year's special worship service and a picnic lunch on the church grounds.
All faiths are welcome, and participants are encouraged to bring a potluck dish to share for the picnic.
Carnes-McNaughton feels there is much to gain for members of the public choosing to attend.

“They gain a greater appreciation of the depth and longevity of this landscape and its cultural heritage, and an understanding of the diversity of early settlers, the importance of religion in their lives in good times and bad times and how churches of this type served entire communities as cultural hearths, uniting families past and present,” Carnes-McNaughton said.
Over the years Carnes-McNaughton has attended and provided support for many reunions. She has observed many special moments.

“One of my favorite moments came when I witnessed (along with the congregants attending) the baptism of a McDiarmid descendant, a 5-month old boy," Carnes-McNaughton recounted.

"Watching that child's face as Reverend Clark Remsburg touched his forehead with cool water, and declared him to us all to accept into the fold, walking him up and down each aisle singing Jesus Loves Me, and everyone standing to welcome this child, was so moving and meaningful, especially as I glanced out the open window into the graveyard and spotted his ancestor Rev. Angus McDiarmid's marker, knowing that he too was witnessing this event and the newest generation of McDiarmid of the Sandhills."

The descendant congregation of the Long Street Presbyterian Church, the Fort Bragg CRMP and Fort Bragg’s Garrison Religious Support Office will host their annual reunion in celebration of the historic Argyle community on Sunday, June 26 at 11 a.m.

The church has no electricity or climate controls, so those in attendance should dress appropriately for warm weather conditions. Parking is available near the church with assistance from the Chaplain’s Office for elderly and physically challenged patrons. Patrons entering Fort Bragg through an access control point should review installation access procedures prior to arrival to avoid delays.

This year’s reunion will feature some historical highlights of early settlement in the region and Carnes-McNaughton will have an 1826 Gaelic Bible, on hand.

The bible was donated to the church by Donald McDonald of Edinburgh. McDonald donated a Gaelic bible to every church who once had Gaelic language services.

The bible is housed at the Fort Bragg CRMP Artifact Curation Facility for permanent care and will be at the event in a protective case to share with the attendees.