Curate Essentials: An herbal apothecary and boutique in the heart of Haymount Hill 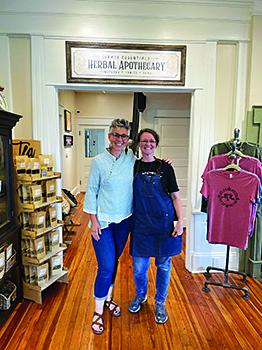 The porch at Curate Essentials is astir with energy. The white house looks pristine from the road with lush greenery adding to the overall ambiance given by the large wrap-around porch and broad windows. The atmosphere is cozy and relaxed.

On one side of the porch two women sit sipping coffee and snacking while discussing the herbs growing out front. On the other side of the porch is a family, their toddler daughter running around the chairs while they sip out of white glass mugs. Traffic is buzzing by and people are constantly coming and going from the shop.

Just inside the house, behind the counter is the owner, Leslie Pearson.

Her short gray hair is well-coiffed and the dark rims of her glasses frame her face well. She moves fast around the small coffee counter inside. She wears a pair of jeans and a light, sage tunic that meshes well against the herbs and handmade items in the shop. Pearson talks with her customers, giving opinions and ideas for purchases or remedies for their ailments. When she speaks, she’s relaxed and smiles frequently. Pearson looks perfectly at home in her new space. She laughs between ringing up her customers and gives friendly waves to those entering and exiting. Her own charm is endearing and inviting.

The house itself has many rooms with different types of bookshelves and cabinets lining each room. The gentle smell of herbs overtakes each portion of it. The smell even reaches the porch as the door opens and closes. The shelves inside are lined with glass bottles and soaps, metal jars of hand salves. Jewelry decorates many walls within the home — eclectic pieces of metals, leathers and even animal teeth. In the back of the house is a kitchen where large jars of herbs are stored and open glass canisters sit on countertops with herbs steeping in rich, dark water. Upstairs is Pearson’s office and artist studio. It’s bright and clean, overlooking the main area of Haymount. Overall, the house is like walking into a mixture of Cape Cod and a trip into Wonderland. It embodies Pearson well.

“The whole shop is if you looked inside Leslie’s brain,” she says laughing.

Pearson walks out to the front of the shop. As she passes people by, she greets them or stops to chat about an herb they are looking to buy. Eventually she arrives at the front near her gardens. She leans against the white railing and looks back at her newest endeavor.

Just a short time ago, she was the owner of The Fayetteville Pie Company. She still currently runs her event venue, Vizcaya Villa, which inhabits that space that was formerly The Fayetteville Museum of Art. Pearson bought the building at 1302 Fort Bragg Road in 2018, originally intending for it to just be an artist’s studio. When Covid hit, Pearson said she became more and more interested in finding medicinal herbs for herself.

“I thought this would be a great thing to share with people. That’s really when the business itself pivoted to becoming an herbal apothecary. That was kind of the transition,” she said. Person stops for a moment, looks back at the porch, smiles and nods her head in approval. She is proud of it.

Pearson is about halfway done with a certification in herbal medicine and plans to move full steam ahead. As an artist, Pearson finds that things in her life are constantly evolving. She started The Fayetteville Pie company as a way to get space to cater the events at her venue. This led to the Pie Co’s first location on Rowan street.

“We thought — why wouldn’t we open it as a restaurant for lunch. We landed on pies.”

This was in part because Pearson grew up near her grandmother in Missouri. Her and her cousins often found themselves in and out of her grandmother’s home and she would have “one dish wonders” available for all the kids. For Pearson, savory pies were part of normal, everyday life.

“There was never a day where there wasn’t a pie cooling on the counter. My grandmother was into gardening and pickling and canning,” she said.

Her grandmother also first introduced Pearson to herbal and natural medicines. One of the things her grandmother introduced her to brought her to the next. In her life, as Pearson notes, one thing usually leads to another.

“The pie shop took off on its own accord. It became very successful and I’m proud of that business … but now I’ll be the herb lady instead of the pie lady.”

She sold the pie shop in December 2021 in order to devote more time to the business that was evolving naturally before her eyes.

“That allowed me to put something to bed and start something new. I love to start businesses, I guess,” Pearson laughs then becomes serious. “This is one I think I could really die in — work until I’m 80 years old.”

Pearson’s plan for Curate Essentials is to join the herbal apothecary portion with an artist studio and community art space including holding classes. She would like to see education on natural dyeing, eco printing and of course, herbal education.

“I want to bring it all full circle.”

Part of that for Pearson is the inclusion of her beloved sister, Leigh Gonzalez. As kids Gonzalez and Pearson often spoke about opening a coffee shop/slash used book store when they grew up. As life usually does, the two sisters' paths took them in different directions. Pearson found herself completing her masters in museum studies in England and then later coming back to the states and joining the military to help with student loans.

“I asked [the Army], ‘what’s the most creative thing I can do?’ I became a photojournalist.”

Pearson’s husband also served in the military which brought them to Fort Bragg. They are now, as she says, Fayetteville by choice. For Pearson, there’s “more to do here” than she can accomplish and the progression of it all felt natural. One thing in art usually leads to another. In life it is the same.

“It feels like you just follow a path … You might turn left or turn right a little bit but it all works out. Like right now, my life and this shop represents everything I know and everything I like coming full circle for me.”

Pearson says the biggest part of that is her love of working with her sister. For both of them, this shop seemed like a “pipe dream” that they began to think was never going to happen. Now, the two move seamlessly inside the shop and speak quietly to one another. Gonzalez appears a bit more shy than Pearson but it is clear that the sisters have a deep love for one another.

“It’s been fun working toward this dream together,” Gonzalez said. “I think because we are sisters we have good communication and are better equipped to work together through things that are stressful.”

One stress for them is the amount of hard work needed for a growing business. Pearson said she “basically” lives at the shop. For her though, the plunge into this business was easy and the hard work was expected. In the beginning, she says, it’s all about the push as a business owner.

“It’s been a struggle but as an artist, I can visualize better than most people. In my mind's eye I can see what the outcome might be. I do that with my artwork. That has served me well,” Pearson said.

At the end of the night, Pearson will go home tired. She’ll water the gardens here and then those at her home. She will do some crossword puzzles to help turn her mind off and let it rest. Sitting down and having a conversation with her, it is clear that turning her mind off is rare indeed.

“My brain is always on fire,” she laughs. She details the hard work it takes as a business owner again and then stops before saying, “I do try and get some sleep.”

For today, Pearson is sitting on her porch, talking with her customers and dreaming of opening a space for art classes. Maybe it’ll be next door, she jokes. She smiles again and looks around.

“I’m just glad to be able to give my whole heart to it right now.”