Stronger Together : All American Week on Fort Bragg celebrates paratrooper service and sacrifice 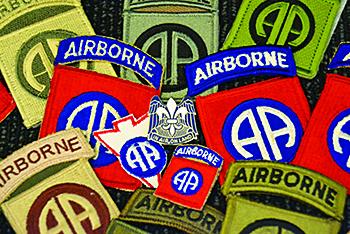 All American Week is fully back this year after several delays. This will be the first time since 2019 that the 82nd Airborne Division will hold an entire week of events.
Last year, the week was shortened to a few special days because of a deployment to Afghanistan.

All American Week 2022 was initially scheduled for May. Due to the deployment to Europe, it was delayed until September. But, Lt. Col. Brett Lea, the Public Affairs Officer of the 82nd Airborne Division, said that All American Week is back and they are excited to celebrate as a Division.

“As a Division and as an Army, we want to be together, and we're stronger when we're together,” Lea said. “I think that All American Week has traditionally always been about current and former paratroopers and family members coming together and celebrating what it means to be All Americans. And this year, more than any, we're able to actually celebrate being able to be together again. We're coming off our historic mission in Europe, where we demonstrated our strength of our alliance with our European allies. And we're coming home and showing the strength of us all being together here at Fort Bragg again.”

“It's a really exciting moment for the division. We're thrilled to be able to do it again.”

The theme of this year's All American Week is "Stronger Together.”
The week of celebration gives paratroopers, past and present, a chance to celebrate their service in America’s Guard of Honor and remember those who made the ultimate sacrifice.
Throughout the week, paratroopers will compete in a series of competitions to see who can claim the title of best of the best. This will include boxing, combatives, soccer, flag football, functional fitness and tug-of-war, as well as a culinary competition.

Family members and the public are also invited from Sept. 26 through Sept. 28 to the U.S. Army Advanced Airborne School. Visitors get the opportunity to learn about airborne operations and exit the 34-foot tower, which simulates exiting a military aircraft during an airborne operation.

“We're kicking it off with the division run like we do traditionally,” Lea said. “We're inviting back all the veterans to be part of that.”

The 82nd Airborne Division Run will happen on Monday, Sept. 26 at 6:30 a.m. on Long Street. The run will feature the entire Division in an esprit de corps event for current and past paratroopers and their families. Many people bring signs and will cheer the Division from the sides of Long Street.
Following the Division rRun will be a breakfast at the 2nd Brigade Combat Team’s Falcon Cafe. New paratroopers will pair with older paratroopers to be able to talk about how being in airborne units has changed over the decades.

On Tuesday, Sept. 27, there will be four separate events. The first will be the All American Week 10-Miler at Simmons Airfield. This will kick off at 6:30 a.m. The second event will be a Prayer Breakfast at the Iron Mike Conference Center. The Division Chaplain will kick this off at 7 a.m.

At 11 a.m., the 82nd Airborne Museum on post will host the 82nd Airborne Division Memorial Ceremony. This ceremony will honor paratroopers who made the ultimate sacrifice in combat or during training in the past year.

The day will end at 7 p.m. during the Family Fun Run. This run is open to paratroopers and their families to run a 5K down Ardennes Street.

Inductees were selected based on their service within the 82nd Airborne Division. Nominees have been awarded the Medal of Honor or served a minimum of two years within the Division. The ceremony will be at 10:30 a.m. on Ardennes Street.

All American Week will wrap up on Friday, Sept. 29 with the 82nd Airborne Division Review, the first since 2014. During the Review, the entire Division will be arrayed in formation on the field to conduct a “pass in review” in front of a crowd of thousands. They will also recognize the Jumpmaster of the Year and the All American Week competition winners.

“In the past, we did the airborne review at Sicily Drop Zone. So this will be new bringing that back. There's a lot of tradition with putting the Division out on Pike Field and making a show of the Division and its unity and its strength. And I think that's a great way for us to have the first All American week we've done since 2019,” Lea said.

Those with access to Fort Bragg can attend All American Week events. For most events, visitors without military identification will need a visitor’s pass that can be obtained at the All American Visitor’s Center located at 3550 All American Freeway.

Visitors can go to the kiosk as long as they have a form of I.D., proof of insurance and registration for their car to get a pass for up to 30 days, Lea said.

“And we highly suggest that people do that at least the week before All American Week because if you're trying to do it that the morning of an event, you're going to have a lot of trouble getting there on time. So we encourage people to stop by the gate ahead of time to get that pass.”
Lea says that All American Week is a must see for those who have never attended the event before.

“It's something else to see the thousands of paratroopers and former paratroopers and their families and kids, to see the Division in its entirety running up and down Long Street, to see the division marching on Pike Field. It's really an inspiring sight,” Lea said. “So if you haven't come, there's something for everybody to do. And if you have been here before, you need to come back because it's now an opportunity for us to get together in person and enjoy the camaraderie of what it is to be an All American.”

For more information on the event, go to www.facebook.com/82ndAirborneDivision.