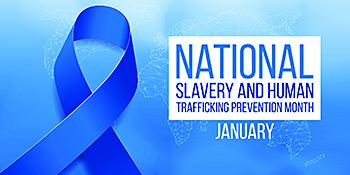 January is a time of rebirth, conviction-driven resolutions, and a do-over for last year’s missteps and disappointments. It’s a time when people can look toward the future and aspire to become better than they were.

For all the joys of a clean slate, January can also be a month of harsh realities, short days, and a reminder of the ugliness that lurks at the edge of our everyday lives.
In addition to the federally recognized Martin Luther King Jr. holiday, January is also National Slavery and Human Trafficking Prevention Month.

In partnership with W.O.R.T.H. Court (We Overcome Recidivism Through Healing), Fayetteville Alumnae Chapter of Delta Sigma Theta Sorority, and Methodist University Social Work Department, the Child Advocacy Center of Fayetteville has put together several initiatives during the month of January to bring awareness to a crime that destroys the lives of thousands each year.
Research conducted by the American Civil Liberties Union suggests that between 15,000 and 18,000 people are trafficked yearly. Exact numbers are difficult to nail down due to the far-reaching and fast-paced nature of the crime. Still, according to the U.S. Department of State, there are approximately 24.9 million victims of human trafficking worldwide at any given time.

Human trafficking — whose victims can be any age, gender or race — is recognized as the use of force, fraud or coercion to obtain or exploit individuals for labor or commercial sex acts.
Though the epidemic is worldwide, the potential for human trafficking exists everywhere. From the bustling city scapes of New York down to rural Appalachia — there’s no such thing as a safe space.

Because of its proximity to I-95 and easy access to major cities like Atlanta, Charlotte and Raleigh, North Carolina ranks among the top 15 states in the nation for human trafficking.
Due to these alarming numbers, CAC has made it a priority this January to not only inform the public about the very real dangers of human trafficking, but to arm them with the tools to prevent it as well.
One initiative intended to bring the community into a larger conversation about human trafficking is the inaugural “Be Their Voice 5k Run” on Saturday, Jan. 28 at Methodist University. Race-day registration begins at 8 a.m.; the race will officially start at 9.

Fayetteville Running Club, a local nonprofit organization, is assisting the CAC with this special race meant to honor victims and bring awareness to this growing issue.
The race is $25 to participate, and the money raised will be split between the CAC and W.O.R.T.H. — North Carolina’s only human trafficking court.

“We’re proud we can use our love of running to help and serve our community. We’ve been a part of this town for almost 15 years and cherish opportunities like ‘Be Their Voice 5k’ to give back,” FRC President Shaun Wussow shared via a press release for the event.

Vagabond coffee will be on-site to warm up spectators with hot drinks and bottled water for sale. For sweet or savory breakfast options, local favorite Fayetteville Pie Company will have some of their delicious wares for purchase as well. In honor of the mission, both businesses will donate a portion of the day’s sales to CAC.

Founded in 1993, CAC, a nonprofit organization, was instituted to create a safe space for children to share their stories of abuse with a panel of professionals specially trained to meet their unique needs. Partnering with over 19 different agencies, the CAC strives to “alleviate the trauma children experience once a disclosure of sexual abuse or serious physical abuse occurs by creating a community of collaborating advocates.”

According to their website, the CAC’s mission is to collaborate with community partners to respond to and prevent child abuse. As children make up an estimated 27% of all human trafficking victims worldwide, the CAC feels it is particularly important to support all efforts to bring awareness to the danger modern-day slavery poses to an already vulnerable population.

“We want the community to have some hands-on tools to recognize the signs of human trafficking,” said Faith Boehmer, the CAC’s Prevention and Volunteer Coordinator.

“It does happen here. It happens in the small rural communities — it happens everywhere,” she said.

In addition to this month’s 5k, the CAC has put together a commendable list of activities to aid in its information dissemination efforts.

The sheer number of scheduled activities for this month’s campaign clearly indicates its urgency. As the number of victims continues to rise locally and abroad, the need for action is long overdue, and the role of “passive citizen” is no longer enough.
Awareness and action are at the heart of this initiative. While they alone can’t make this problem disappear — it’s a great place to start — a message CAC hopes to make clear.

“Ultimately, we want for the people that attend to walk away with an awareness, education and confidence that allows them to recognize that they can do something,” Boehmer shared. “We want them to take that information to their churches, schools and social groups and help others become aware of the signs at grocery stores, hotels or restaurants. We hope they take advantage of that education and call or text the number to get help.”

If you suspect someone is a victim of human trafficking, call the National Human Trafficking Hotline at 1-888-373-7888.