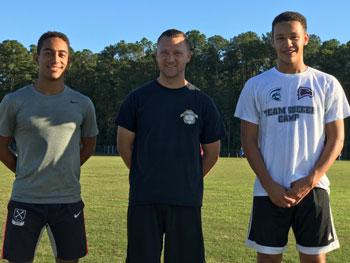 When the Patriot Athletic Conference was formed, Gray’s Creek found itself as the relatively new kid on a tough boys’ soccer block that included successful programs at Terry Sanford and Pine Forest.

But when the smoke cleared from the regular season, it was Gray’s Creek on top of the pack by the slimmest of margins, headed to the state 3-A playoffs as the No. 1 team from the new nineteam league.

Asked what the key to success for this year’s team was, head coach Bryan Pagan quickly pointed to chemistry.

“It was a little bit of an issue for us at the beginning of the year,’’ he said. “Slowly but surely, we started putting our tightness together.’’

Unfortunately, as the team started stringing wins together, Pagan found himself with another problem. “When you start having wins and success, it’s hard to keep teenagers focused,’’ he said. “We had a couple of hiccups with losses, but I’ve been really proud of a lot of the leadership and composure we’ve had this year.’’

Two of the younger leaders on the team have been junior Hayden Diaz and freshman C.J. Eley.

Diaz leads the Bears in scoring with 26 goals while Eley has 11.

“Hayden has come a long way,’’ Pagan said. “He started out playing defender, and he has gradually moved himself up the field. He’s a very quick, strong kid able to take people off the dribble and get a lot of opportunities for us.’’

At 6-foot-3 inches, Eley is unusually tall for a soccer player. He brings a physical presence to the team that has been a big asset. “That helps with set pieces and corner kicks,’’ Pagan said of Eley’s height. “He’s been able to find the back of the net quite a bit this year.’’

Like his coach, Diaz said chemistry has been a big factor in the Bears’ success. “Everybody hangs out with everybody,’’ he said. “We joke with each other and have fun with each other. To have that chemistry on the field shows.’’

Eley said the Bears felt a little intimidated early on, but it didn’t last. “As soon as we got into the swing of things, we got comfortable,’’ he said. “We just stayed determined and worked hard and wanted it more than the other teams.’’

Gray’s Creek was assured the Patriot Conference’s No. 1 berth in the state 3-A playoffs regardless of how it fared in last week’s conference tournament.

Now that the Bears are in the postseason, Pagan said maintaining composure is crucial.

“We’ve emphasized it all season,’’ he said. “There are going to be times you’re down. The first three or four games we were down and came back and won. From that point on, I didn’t see a lot of us being down.