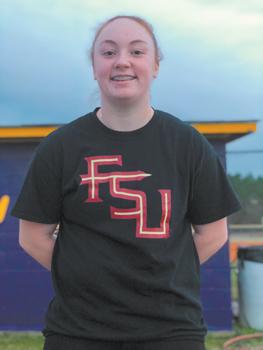 For veteran Jack Britt softball coach Sebrina Wilson, the start of the 2019 season for the Buccaneers doesn’t feel different so far.

But you don’t have to look hard at Jack Britt’s softball field to notice one major change. That’s the big sign on the back of the press box proclaiming the team is the 2018 North Carolina High School Athletic Association 4-A fast-pitch state champion.

Wilson said that sign is the only evidence you’ll see of the championship the Buccaneers won in the finals against South Caldwell last year. “There hasn’t been any mention of anything in the past,’’ Wilson said. “I think that’s what we pushed all year long. Enjoy the time, but that was 2018, and this is 2019 now.’’

That now means Britt lost four solid starters from the state title team, including some impressive bats from players like Savannah Roddy and Rayven Shepard.

But the cupboard is anything but bare. Wilson returns a core of young standouts, the most notable being the versatile Carlie Myrtle, who sparked the Bucs both on the mound and at the plate in their run to the state championship.

“We’re going to be very young,’’ Wilson said. “My young group stepped up at times (last year), but now they’ve got to be the go-to. They are the ones. It’s how we transition from being a part-time go-to person to full-time. You have to produce every game, not every other game.’’

Myrtle will be counted on again for a lot of that daily production. Last season she batted .500 with 11 doubles, two triples and five home runs while driving in 35 runs.

On the mound, she led pitchers from Cumberland County Schools with 138 strikeouts for the season. She compiled a 21-6 record that included a 2.37 earned run average.

Myrtle said her team feels pressure to perform as well as they did last year but added the mood on the field so far has been loose. “We’re trying to do things the right way and keep errors low,’’ she said.

As for her game, Myrtle worked in the weight room in the offseason to improve her flexibility and range of motion. She felt her pitches were a little flat toward the end of the season, so she’s worked on getting more movement on the ball.

Her goal is to increase her strikeout total this season while also lowering her earned run average.

She agrees with Wilson that the team’s younger players, including herself, have to produce for Britt to continue winning.

Wilson doesn’t expect Myrtle to strike every batter out. She’s counting on Britt’s defense to help the team win like it did last year.

“We’ve got to play solid defense and throw strikes,’’ Wilson said. “Our defense was exceptional in the state playoffs. We’ve got to do that every night and get timely hitting.’’

Wilson felt the Bucs played in the toughest softball conference in the state last season, and she expects more of the same this year.

“It’s not just Richmond,’’ she said. “There’s Lumberton and Purnell Swett. Pinecrest’s going to be an up-and-coming team. Each game, each week, you don’t get a game off. “You can’t make mistakes. That’s going to be key”