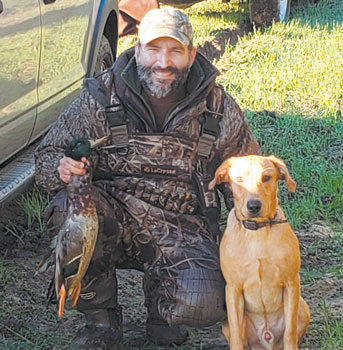 Brian Edkins was principal at South View High School when he first got to know Davin Schmidt. Although initially he saw him from afar, he was quickly impressed.

“I’ve never seen a coach as positive and optimistic as he was with kids,’’ Edkins said. “He’s the one you would want to coach your kid. You would hope he would pick your kid because you knew they were going to have a great experience.
“He was going to treat all the kids well.’’

Schmidt, who was an assistant soccer coach at South View and Hope Mills Middle Schools and coached many years in the Hope Mills recreation program, died earlier this month after lengthy battles with an assortment of ailments. He was 47.

“He could get the worst news in the world and somehow find a silver lining,’’ Edkins said. “It was just amazing. He would try to lead as normal a life as he could during this fight.’’

In his final year at South View, Edkins recalled a time when Schmidt’s oldest son, Davin II, was being recognized for making the A-B honor roll.

Schmidt was in the hospital at Duke at the time, but got permission from his doctors to come to South View to see his child recognized. “Throughout his battle, he tried to give as much normalcy to his family as possible,’’ Edkins said.
The battle started early in his life as Schmidt dealt with colitis and Crohn’s disease. In 2005 he was diagnosed with early stages of colon cancer and his colon was removed.

He contracted a disease that caused his bile ducts to shut down, which led to liver cancer. He fell into a protocol that made him eligible for a liver transplant, which took place in March of 2017.

Six months after the successful transplant, he was diagnosed with leukemia.

He went into remission from the leukemia for a year, and then it returned. Chemotherapy was unsuccessful, so he underwent a stem cell transplant, using stem cells from his own body.

He wanted to try a promising experimental drug, but four appeals to his insurance company to use it were denied.

His condition worsened. He developed bleeding on the brain, and the leukemia became more aggressive.

Despite his poor health, he got permission for a day pass from Duke so he could return to Fayetteville a see his twins, Darin and Drake, play soccer shortly before his death.

“Even until the end, he was not ready to go,’’ said Kelly McLaurin Schmidt, Davin's wife. “He was still fighting. It was just too much.’’

When he started his first recreation team in Hope Mills and named it Gators, friends assumed it was because of Schmidt’s love for the University of Florida.

Kelly said that wasn’t the case. “It’s actually from the time an alligator was found in Hope Mills Lake,’’ she said. “Everybody loved him so much. He never thought he deserved the recognition, but he does.’’

Pictured: Schmidt, an avid duck hunter posed for a picture with his dog, Jäger, after a successful day of hunting.