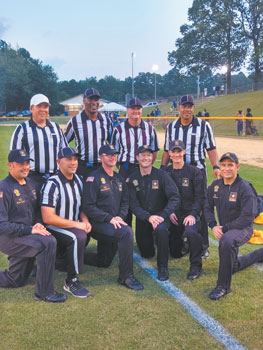 When high school football officials prepare to call a game, traditionally the whole crew holds a pre-game meeting to go over any important details before the contest begins.

Sgt. 1st. Class Ryan Reis had to miss the meeting held with the rest of his crew prior to the recent Pine Forest at Westover contest, but he had a good excuse.

He arrived at the field via parachute, jumping in during a pregame exhibition by the famed United States Army’s Golden Knights parachute team.

Reis, who is a native of Tacoma, Washington, is in his third year with the Golden Knights and his second as a football official with the Southeastern Athletic Officials Association.

He got the idea to arrive at the Westover game via parachute when he first learned the Golden Knights were scheduled to jump at Westover’s homecoming game.

He was not originally assigned to the Westover game as an official, so he called Neil Buie, regional supervisor of football officials for the SAOA.

“I had refereed one of the Westover games earlier this year and knew they were in our scheduling district,’’ Reis said. He said he always thought if he ever had the opportunity, arriving via parachute at a game he was going to be officiating would be something special.

Aware that Buie sometimes has challenges scheduling officials to call games because of a current shortage in available crews, he called to see if there was any way it could be done.

“Obviously, my Army job comes first,’’ Reis said. “There’s no way around that.’’

Reis had cleared the idea with his Army superiors and Buie supported the suggestion 100%, so Reis was added to the officiating crew for the game.

Reis works any of three positions when he’s a football official, either the line judge, head linesman or back judge. For the Westover game, he was the head linesman.

The original plan for the Westover jump was for Westover principal Dr. Vernon Lowery to accompany the Golden Knights in a tandem jump.

They had done the same thing last season when Terry Sanford principal Tom Hatch jumped in to a Bulldog home game.

Unfortunately, the Golden Knights have specific criteria that must be met during a tandem jump, and conditions for Friday night prevented them from allowing Dr. Lowery to jump with the team.

But the Golden Knights themselves jumped with no problem Reis said.

Reis hoped the jump sent a message about both high school football officials and soldiers. “I understand it’s not for everybody,’’ he said. “Officiating football isn’t for everybody, and being in the Army isn’t for everybody.
“We do the things we do because we like them. Also it’s a great opportunity to show it’s an avenue of something that you can do.’’

Reis said people don’t have to be pigeonholed into doing things a certain way because of their background or certain pressures they are dealing with in life.

“There are multiple things you can do in your life that don’t necessarily have to be the standard operating way for everybody else,’’ he said.