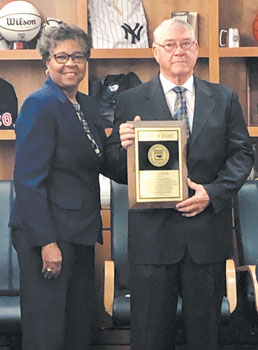 When veteran athletic administrator Fred McDaniel became the latest person with Fayetteville ties to be named to the North Carolina High School Athletic Association Hall of Fame, he had difficulty figuring what the fuss was about.
“I don’t know why you’re doing this,’’ he said after learning he was a member of the 2020 class of inductees that will be honored in April. “I’m just doing my job. I was doing what I was supposed to.’’

In doing that job, McDaniel has become recognized in both Cumberland County and around the state of North Carolina as a hardworking professional who helped raise the profile of the athletic director’s job while also providing guidance and leadership to others in the position.

A Fayetteville native, McDaniel is a graduate of old Central High School and what is now the University of North Carolina at Pembroke, earning a degree in health and physical education.

He advanced to the administrative level in 1988 when he became athletic director and assistant principal at Westover High School.

From there, he went to the same position at Cape Fear High School in 1994, then moved to the Cumberland County Schools central office as student activities director, were he remained until 1999 when he retired from full-time work.

McDaniel played a key role for the North Carolina Athletic Directors Association, which earned him both state and national recognition.

He received a citation award from the National Federation of State High School Associations in 2011 and was selected to the NCADA Hall of Fame in 2013. He’s also a member of the Fayetteville Sports Club Hall of Fame.

The NCHSAA honored him with its Dave Harris Award as the state’s athletic director of the year.

McDaniel gives credit for much of his success as an athletic administrator to three great athletic directors he worked with earlier in is career: Len Maness at Terry Sanford, John Daskal at Reid Ross and Terry Sanford and Bill Carver of E.E. Smith, also a former county student activities director.

“These people helped me tremulously along the way and made me what I was,’’ he said. “I want to give them credit too. Len Maness taught me more than I can imagine anybody could teach me about life and anything else.
“They did it for me. They made me who I am.’’

McDaniel said the most gratifying thing about his career were the memories of times former players came back to him and thanked him for the influence he had on their lives.

“You don’t see it right then,’’ he said. “Down the road you see you had an influence, hopefully a positive influence.’’

Another area where McDaniel has had a positive influence is teaching NCADA Leadership Training Institute courses for fellow athletic directors to help them better understand the nature of their job.

McDaniel remembered when he was first hired as an athletic director he was given a set of keys and pointed toward the football field.

“We’ve tried to make it easier for people so they know what to do better,’’ he said. McDaniel still teaches LTI courses for the NCADA.

“We want to make a better athletic program for the kids,’’ McDaniel said. “It’s all about the kids.’’

From L-R: NCHSAA Commissioner Que Tucker takes a picture  with Fred McDaniel and his Hall of Fame plaque.