Editor's note: The Cape Fear girls won their third consecutive N.C. High School Athletic Association 3-A East Regional title on Tuesday and Toni Blackwell took her second consecutive individual title. Blackwell shot a 76 at Reedy Creek Golf Course in Four Oaks. The Colt team shot a 269 to beat second-place Topsail High school by nine strokes. Cape Fear’s other scores that counted were a 91 by Gabby Bynum and a 102 by Lexi Perez. After a season dominating play in the Patriot Athletic Conference, the Cape Fear girls golf team is ready to make another run at state golf honors.

Blackwell averaged 77.9 per match, only shooting one round in the 80s. The average winning score for the Colt team was 268.8.

They ended the regular season with a round of 255, their lowest of the year, on their home course at Baywood Golf Club.

Colt golf coach Todd Edge said the final two weeks of the season the team exceeded his expectations. In the last match at Baywood his top four golfers all broke 100.

He knew the Colts would be led by returning veterans Blackwell and Gabby Bynum, but at the start of the season he was concerned who would step up to provide the third score in each match that’s used

to determine the team total.
That turned out to be freshman Lexi Perez, who ended the season with a 100.6 average.

“We knew she could hit the ball, but there’s a difference between hitting and scoring,’’ Edge said. “She has really picked it up and become our No. 3 scorer for the majority of the season.’’

This is only Perez’s second year playing golf, and she said she felt pressure not to let the team down and prevent them from having a chance to take the conference title again.

“All of my clubs have improved from when I started,’’ she said.

With her one round of 83, Blackwell missed her goal of having all of her regular season rounds in the 70s. She felt she played well during the year and is looking forward to another shot at regional and state success.

“I think it will help me and Gabby because we know what to expect and we’re used to it,’’ she said of the postseason. “We have to stay focused, work hard and practice.’’

Bynum said the biggest difference in the postseason will be the level of competition the Colts will face. “These girls are shooting in the 70s and lower 80s,’’ she said. “It’s just the nerves. They really do get 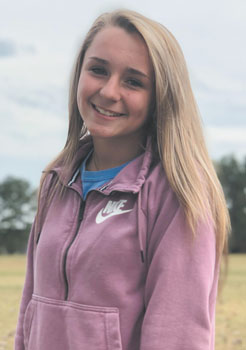 She said the key to success in the postseason will be containing nerves and hitting the ball well in the right spots.

The Colts have won the 3-A East Regional tournament the past two seasons, but Edge knows winning a third will be a challenge.

The regional was held this past Monday at Reedy Creek Golf Course in Four Oaks.

It’s the home course for a number of schools scheduled to play in the regional, so they all have more experience on the course than the Cape Fear golfers do.

The state tournament, which the Colts hope to qualify for, will be held at Foxfire Village’s Red Course.

”It’s been closed for the majority of the year,’’ Edge said of the Red Course. “They redid their greens.’’

Cape Fear finished fifth in the state on the Red course last season.

“We’ve got to get there first,’’ Edge said. “Going to the regionals is our goal, then getting a team into states. Once we get to states, we’ll see.’’