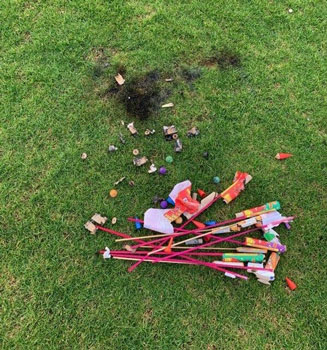 When Cape Fear football coach Jake Thomas brought his son to club wrestling practice after New Year’s Eve, he was met by a disappointing sight on the school’s football field.
Someone had used a small area near the baseball-field end as a launching pad for fireworks.

Photos taken by Thomas showed a burned out spot on the turf of the Cape Fear field with the litter from the various types of fireworks used by whoever trespassed illegally on school grounds still there.

Thomas said it certainly could have been a lot worse, and has been when he’s seen people who’ve driven vehicles onto athletic fields and left damaging doughnuts cut into the turf with the wheels of their trucks or cars.
But seeing the Cape Fear field marred by the fireworks was not a pleasing sign for Thomas, who estimates he and members of his coaching staff spend in the vicinity of 200 hours a year doing everything to the field from cutting the grass, tending to the health of the soil and painting it for Thursday and Friday football contests during the season.

“When I was first coming into coaching, you don’t appreciate how much time you spend on field maintenance, painting the field, all those things,’’ Thomas said. “You really don’t get a full understanding until you do it yourself.’’

Thomas said the fans who show up on Friday night only get to see the end result and don’t realize the total amount of work that the football staff puts into making the field not only safe to play on but appealing to the eye.

Beyond the work on the field, there are rules in place about who can and can’t use school practice facilities like the football field. Thomas noted that not even Cape Fear varsity and junior varsity athletes are allowed to be on school property working out without a member of the coaching staff being present with them.

“There are liability issues,’’ Thomas said. Even in the school weight room, athletes can’t lift without having a coach there to oversee what’s taking place.

Vernon Aldridge, student activities director for the Cumberland County Schools, said those who used the Cape Fear football field for shooting fireworks were guilty of trespassing.
“If definitely has to do with safety reasons, but it’s also a liability issue,’’ Aldridge said, “having folks on our grounds if they are injured. The liability falls on us.’’

Aldridge said high schools are not allowed to use fireworks at their games on Friday nights because it’s a fire code issue. While it used to be alright when Aldridge was a coach at South View in the early part of 2000, the fire marshal later ruled that it was not allowed.

During its run to the state football championship in 1991, South View had a fan who brought a musket-like gun to games that was fired following each Tiger touchdown.

Aldridge said that practice is also no longer allowed due to firearms restrictions on campus.

Thomas said he did not make an official police report of the incident at Cape Fear but he has asked members of the Cape Fear community to help identify who was involved, especially if they were students, so proper discipline can be administered as needed.

Aldridge said the county will likely not get involved and will let Cape Fear handle the matter at the school level, including any decision regarding offering a reward for identifying those involved.