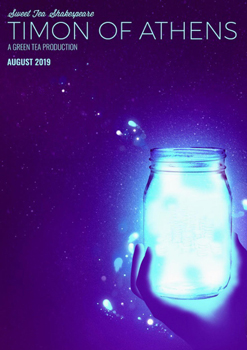 The Sweet Tea Shakespeare Company is taking its act on the road to Hope Mills for the performance of a lesser known work of the legendary playwright entitled "Timon of Athens."

The outdoor performance is scheduled for Wednesday, Aug. 21, at Carleen’s of Hope Mills at the Moulder-Warner House, 5703 Rockfish Road. A preshow concert begins at 7 p.m., with the play starting at 7:30 p.m., weather permitting.

Jen Pommerenke is one of the directors of the play. She divides her time between Fayetteville and Brevard, where she is program director for a summer camp.

Pommerenke said the company performs mostly classical works with the goal of making their theater accessible, magical and delightful for people in the Fayetteville community and beyond.

“It’s kind of like a backyard barbecue with a bunch of family members and a play breaks out in the middle of it,’’ Pommerenke said.

Most of the company’s performances take place outdoors in Fayetteville on the grounds of the 1897 Poe House at the Museum of the Cape Fear. When the weather turns colder, they move to indoor venues.

The company’s props and costumes are what Pommerenke calls minimalist and are designed in such a way that the performances aren’t tied to a specific time period. “We like to be very fluid with that,’’ she said. “We make the story the magical part of it.’’

Pommerenke said "Timon of Athens" enjoyed a resurgence about 10 to 15 years ago when the economy was doing poorly because of problems in the stock market.

The play tells the story of a benevolent philanthropist and businessman who has been exceedingly generous to friends over the years but eventually finds himself in debt.

The friends he once helped abandon him and he leaves Athens to live in a cave.

When another group that has been banished from Athens begins to raise an army to attack the city, the city reaches out to Timon to return and help against the attackers.

Pommerenke said the focus of the story is what do you truly value in life? Are you giving the people you love money and presents or time, care and compassion?

Are you a true friend or do you seek material things that don’t really matter?

The base charge for attending the play is $10, but for those who are able, Pommerenke said the group welcomes donations for an individual ticket up to $50.

The performance begins with a preshow concert at 7 p.m., which gives the audience time to chat, enjoy the local fare and hear a little about Sweet Tea Shakespeare. The performance starts at 7:30 p.m.

The audience is asked to bring its own seating for the outdoor performance. Rental options are available, but they are subject to availability. Spectators should bring their own insect repellent if needed.

Accessing parking at Carleen’s can be tricky. The best entry point is on Hill Street off Rockfish Road, which runs in front of the Baldino’s there, then turn right onto Newton Street. You can also turn on Johnson Street at Robin’s on Main off Main Street and enter from that direction.

Last-minute changes in the performance time or issues with weather will be announced on the Sweet Tea Shakespeare Facebook page around
4:30 p.m. or 5 p.m. You can also get information on the company at www.sweetteashakespeare.com, or by calling 910-420-4384.

"Timon of Athens" will also be performed at the 1897 Poe House Aug. 22-24 at the same times as the Hope Mills performance.

The popular Sweet Tea Shakespeare company will be performing "Timon of Athens" in Hope Mills on Aug. 21. The show will be preceded by a concert at 7 p.m.