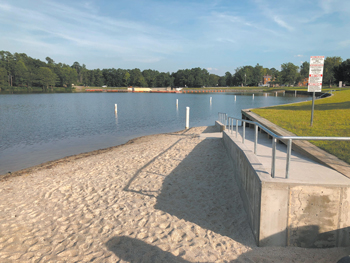 One of the jobs of the North Carolina Department of Transportation is to monitor subrecipients of federal funding that fall under their watch for compliance with the Americans with Disabilites Act.

That’s why sometime last year the town of Hope Mills, as a municipality that receives federal money through DOT, got a letter from DOT checking in on the status of the town’s compliance.

Don Sisko, who heads the public works department for Hope Mills, indicated the town is taking an aggressive approach to making sure the process to assure facilities under town control are either already accessible or will be made that way as soon as possible.

Sisko noted the town only has control over upgrading town-managed facilities and property. Private businesses and other town entities not under government control don’t fall under the direct oversight of the town or Sisko’s department.

To help make sure nothing falls through the cracks, the town has secured the services of the engineering firm of Stewart, Inc. “They have begun their field survey so they can do a self-assessment,’’ Sisko said. “It has to do with streets and sidewalks, facilities and programs.’’

Sisko said he’s already learned some things about ADA compliance that the casual observer likely wouldn’t even think of. A great example is the official town website. Under ADA regulations, it must be made accessible to people who having hearing or vision problems that makes normal interaction with a website difficult.

Toward the end of getting things done, the town has hired a specialist to help oversee the ADA compliance issue. Bruce Clark is the ADA coordinator for the town and has been in that position for about a month. “He’s ramrodding this part of the project,’’ Sisko said.

In addition to the work that is being done by Stewart, the town will be soliciting public input through a variety of outlets . Sisko said it would be similar to the responses the town sought when the comprehensive recreation plan was being developed. “There are going to be public meetings advertised and surveys put out so we can actually get public input on it,’’ he said. “That will all be collated to help us develop a priority listing.’’

Sisko added that Chancer McLaughlin, administrator of development and planning for the town, will coordinate the public input effort.

The work to complete making the town ADA compliant won’t be completed in a short time. “We are realistically trying to get our plan set up to do everything within about 10 years,’’ Sisko said.

He added that the Board of Commissioners is on board and has money budgeted once the areas of need have been identified. They already began last year with upgrading the computer program for the town website. “This year we are starting to look at some of the physical things as well,’’ Sisko said. “We are waiting until we get the report back from Stewart.’’

But there is some work ongoing. The mill house that is being converted into a museum will require a wall to be removed so the bathroom can be modified to make it ADA compliant.

Work was recently completed on the new bulkhead at Hope Mills Lake, which included the installment of a ramp leading to the kayak launch and swim areas.

“That’s the last project we had on the books that we’ve completed,’’ Sisko said of the ramp at the bulkhead. “We are looking at pressing forward and going back to past practices and making the corrections on those, bringing that to compliance.’’

Sisko noted that  anyone with concerns about ADA compliance in the town should contact Clark. His phone number is 910-429-3387, and his email is bclark@townofhopemills.com.

“We’ll do our outright best to make sure whatever is brought to our attention either gets corrected or is programmed for correction,’’ Sisko said.

Clark said the town already developed a public awareness notice that can be seen at all facilities open to the public as well as on the town’s website and all of its social media sites.

“It’s basically a position statement on where we stand in providing compliancy with ADA in our facilities and our programs,’’ Clark said.

“The 1,000-yard view of this program, of what we’re trying to get established here, is equal access, basically, equal access for everybody to our programs, to our facilities.’’