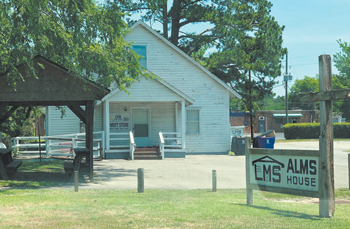 After a successful summer of providing meals to children in need, the ALMS House in Hope Mills is gearing up for an even more ambitious project of a similar nature as school resumes in Cumberland County.

Over the summer months, the ALMS House provided an average of 20 bag lunches a week to children and some adults who needed them, getting much-needed support from the community in the form of donations of food and money.

A few weeks ago they got a call to help out with another program that received state funding to provide food to children if another organization would give them a location where the children could go to relax and enjoy the meals. That program ended in early August, and ALMS House was asked to pick up the ball for the remaining weeks until school resumed late this month.

Since that responsibility was added, the ALMS House  has been averaging 90 meals per day in addition to the 20 per week they had been doing. “It’s unbelievable how the community has stepped up and provided both funding and provisions for us,’’ said Delores Schiebe of the ALMS House. “It has just fallen into place.’’

Once school resumes, the pace at ALMS House will pick up even more as they begin providing take-home bag lunches for under-privileged children that school social workers have identified as likely to not have access to food over the weekend.

Schiebe said ALMS House will start packing some 250 bag lunches the first week of school, but as time passes the numbers will grow upwards of 450 to 500 bags per week.

“We try to make the bags as nutritious as possible,’’ Schiebe said. They include things like milk and natural fruit juice, not simply flavored water. Other items include ramen noodles, pop-top cans of spaghetti or other main course type dishes, beef jerky, cheese and crackers, fruit snacks and
a spoon.

These bags are designed to be taken home each Friday by students that have been identified by school social workers as children at risk of going without food over the weekend.

Schiebe said the number of bags increases because often a child will return from the weekend and say they shared the food with a sibling and ask if they could get an extra bag for them.

Since there are so many more children involved than the summer program, this is much more expensive for the ALMS House to handle and requires even more support from the community.

“We encourage cash because we go shopping,’’ Schiebe said of the process used to fill the bags each week.

Donations of actual food are also accepted, Schiebe said, including pop-top cans of meat or pasta or the microwaveable dishes that come in single-serve plastic containers. Bottled water is also welcome.

Volunteers came in this week at ALMS House to begin packing the first bags that will go out to the children this year.

Looking ahead, Schiebe said plans are in the works for the annual Peace, Love, Walk event, scheduled in October 19 at 4 p.m., that is a major benefit for the ALMS House. Members Credit Union is the primary sponsor of the walk. “We are looking for sponsors, walkers and vendors,’’ Schiebe said.

For further information on the walk and how to support it, Schiebe
said people can contact the ALMS House or the local Members Credit Union office.