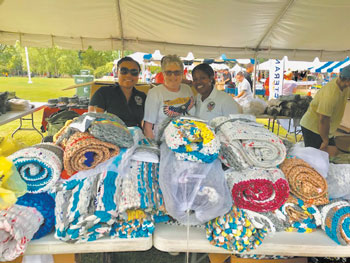 The Hope Mills Parks and Recreation Department is in the third year of a program to make sleeping mats for the homeless from plastic bags.

Anne Evanco, a program specialist for the Parks and Recreation Department, said the program has stockpiled plenty of raw material for the work, but it needs more helping hands to create the mats.
The program started at the former senior center on Davis Street but has relocated to the Parks and Recreation building on Rockfish Road.
Evanco estimates that the volunteers in the program have churned out roughly 300 mats since they started.
They collect plastic bags from various local businesses and then bring them to the recreation center. There they are flattened, folded and cut into a material they call plarn, which means plastic yarn.
Once the plarn has been made, it can be used in a variety of ways to create the sleeping mats. Evanco said they can be knitted, crocheted or weaved, depending on the preference of the person making the mat.
She added it’s a simple process to learn and anyone can do it with minimal training.
When people come out to take part in the program for the first time, Evanco said they are usually assigned to the process of making the plarn.
“We want them to learn each step,’’ she said. “After you learn how to process the bags and make the plarn, it doesn’t take long to learn the weaving method.’’
The process of making a mat can take from 10 to 30 hours Evanco said. A lot of that depends on the individual worker and how nimble their hands are. Some of the crocheted mats can take as long as 60 hours.
The mat makers convene at the recreation center three times a week on Monday, Wednesday and Friday from noon until 4 p.m. each day.
While the program was originally intended for senior citizens, Evanco said people of all ages are now welcome to take part.
The mat-making room is somewhat crowded on Wednesday and Friday, Evanco said, but they could use some more volunteers who would like to work on mats on Mondays.
The mat makers aren’t responsible for getting the mats into the hands of the homeless. The recreation center staff works with other organizations, especially Fayetteville Urban Ministry, to drop off the mats and have them put directly into the hands of the homeless.
Evanco said she doesn’t have an idea on how long a mat will actually last, saying it varies from person to person and the type of surface they might be sleeping on, with mats used on grass surfaces standing up better than those used on concrete.
Anyone interested in learning how to make the mats should just show up at one of the Monday, Wednesday or Friday sessions. “The people in this program are very welcoming,’’ Evanco said. “We’ll bring that person in and put them to work, show them the process.

“It’s great to see someone who has never done anything like this before. There’s something for everyone in this program.’’