The conference was geared toward communities roughly the same size as Hope Mills and looked at creative ways various towns had used to promote interest on the part of visitors that didn’t involve huge expenditures of money. 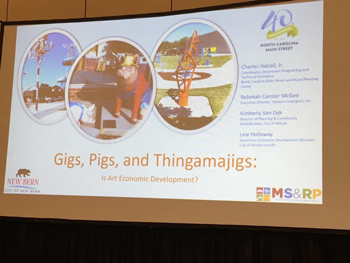 Warner and Holland split up during their time at the conference so each could come back with different ideas on revitalization.

With the news that the historic Trade Street property in Hope Mills has been put up for sale, Warner was particularly interested in things that the town can do to preserve the history there and possibly renovate some of the buildings along the street.

“We had already brought in somebody that explained you can get tax credits for historical preservation and renovating the building,’’ Warner said of a recent presentation that was put on by the town.

One of the most interesting presentations Warner attended involved something Hope Mills has already started doing, the addition of art to the downtown
landscape.

Ironically, before the presentation started, Warner saw pictures displayed from a town art display in nearby Laurinburg that was the inspiration for Hope Mills’ initial foray into municipal art.

Warner’s son, Teddy, worked with the town of Laurinburg when it started the idea of buying a lot, clearing it and setting up sculptures. “They were featured in one talk about how that helped economic development,’’ Warner said of the Laurinburg project.

Hope Mills established an agreement with Adam Walls, who lives in Hope Mills and is an art instructor at UNC-Pembroke, to have his art students provide the town with sculptures.

Warner noted that the presentation highlighted the success of art in other small North Carolina towns.

She mentioned the whirligig park in downtown Wilson, which features a variety of tall, colorful wind-driven sculptures.

Lexington, which is famous for its barbecue, features an assortment of pink pig statues.

The nearby town of Sanford has become famous for local murals that tell the story of the town.

“We could use those murals to show what Trade Street was like years ago,’’ Warner said.

Warner would especially like to do something to bring back the memories of the days when there was a train depot in Hope Mills and trains made regular stops in the town, instead of whizzing through over the downtown bridge as they do today.

Her desire is to get some kind of grant assistance to create a mural on Trade Street near where the old depot once stood. “We’ve got pictures tied to the railroad when it ran through town behind the old mill,’’ she said.

There are many other things Warner saw that could bring back an old-time feel to Hope Mills while at the same time bringing the town into the 21st century.

One thing she saw at the gathering were solar-powered street lights that have a retro look from the 1900s. “Solar lights are very cost effective, and you don’t know it’s a solar light,’’ Warner said.

She also saw some things in a tour of two New Bern churches that could be used at the Thomas Campbell Oakman Memorial Chapel downtown.

“They have times of the day when they are open for prayer,’’ Warner said. “I looked at a garden they had done beside one of them. “They also had a hidden restroom facility that we could easily do by our church. It was cost-effective and served a good purpose.’’

She looked at pavers, bricks and different types of sidewalks. There were also park benches and playgrounds.

Warner hopes to visit Sanford to take a look at the murals there. She would also like for the Hope Mills Creative Arts Council to visit Washington, N.C., a small North Carolina town that has raised significant money for the arts through various partnerships. “Because we’re a tier one county, there is money available if we go the right route to apply for it, to do some of the things we may want to do,’’ she said.