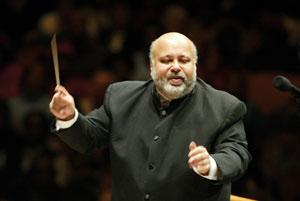 As the 209-2010 Cumberland County Concert Series comes to a close the North Carolina Symphony will perform at Reeves Auditorium on May 20 at 8 p.m. and Resident Conductor William Henry Curry is looking forward to the performance.

“Fayetteville is a great place to play,” said Curry. “We have a long history of being down there and I think that the audiences have been very supportive of us.”

This time around Curry has three lovely pieces planned for the concert goers, two of them are works that he has not conducted before. Copland’s Fanfare for the Common Man opens the show and lasts about three minutes.

“Copland is perhaps our country’s greatest composer of orchestral music,” said Curry. “I worked with him a couple of times in my career. It was a real honor. He was a very helpful, very influential person in my life. His Fanfare for the Common Man was written during World War II. The title is inspired by Abraham Lincoln’s phrase ‘God must have loved the common man because he made so many of them.’”

Howard Hanson’s Symphony #2 follows. A contemporary of Copland, Hanson was part of the first generation of American symphonists —   men who were born at the turn of the 20th century and were teachers ... administrators. They were some of the first American composers to be heard in Europe.

“Europeans thought that American orchestral music was kind of an oxymoron until people like Copland, Hanson and Gershwin changed their minds,” said Curry. “This piece was immediately popular from the first performance. I had a good friend who conducted it all over Europe in the 1980’s and he was stunned by the response.”

Musically conservative for the time in which it was written, Symphony #2, which Hanson subtitled “Romantic,” is described by Curry as melodic, lyrical, effusive and impassioned. This musical nod to American composers is inspired by the fact that Curry has spent the past six years focusing on Russian and German romantics.

“I noticed that over the last 10 years some of the American romantic works have been neglected and I realized that I’ve been neglecting them, too,” said Curry. “It is part of my own artistic vision now, over the next few years, to go back and redo some of these pieces. Because they are not cutting edge they tend to be overlooked these days.”

The concert ends with Tchaikovsky’s 3rd Symphony. This piece is also very melodic. One of the top five most often performed, most popular composers (think Nutcracker and 1812 Overture) Tchaikovsky created wonderful and exciting piece in this symphony.

“Anyone that likes Russian romantic music and knows his other pieces will definitely enjoy this piece,” said Curry. This piece is nicknamed Polish for the fact that in the last movement the rhythm is based on a Polish dance called the Polacca.

All in all Curry Expects to deliver and well rounded repertoire.“It is a very popular program of American music from the grandfathers and deans of American orchestral music of the 20th century,” said Curry. “As well as one of the more beloved composers of all time.”

Visit www.ncsymphony.org for more information or to purchase tickets.