North Carolina Veterans Park:A Living Memorial to Those Who Serve, Three Decades in the Making 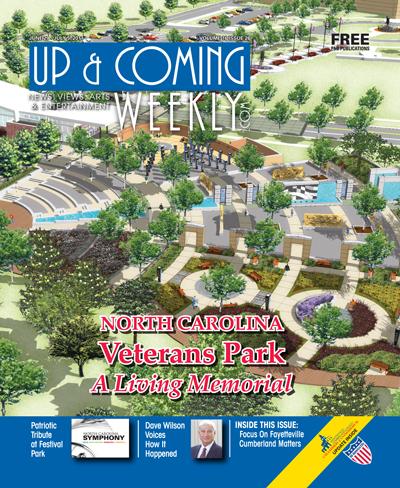 On Monday, July 4, North Carolinians from all walks of life will make their way to the intersection of Bragg Boulevard and Hay Street. There, they will celebrate the completion of Phase One of the North Carolina Veterans Park, a project that has been two and half years in design and construction and more than three decades in the making.

The park, a project of the City of Fayetteville, was ﬁrst suggested by the N.C. General Assembly almost three decades ago. There was a competition between a number of areas at that time, but Cumberland County won the bid to build the park. That was before Hurricane Fran and Hurricane Floyd wreaked havoc on our state. Staring down the face of two natural disasters, the legislature pulled back funding and the park was put on hold.

Fast foward to 2008-2009, and the project began to gain some traction. At that time, former N.C. Senator Tony Rand was considering how much longer he was going to remain in the N.C. Senate. Rand, a proponent of the park and its placement within the conﬁnes of Cumberland County, brought the issues back up and was successful in getting an appropriation for the park. But, rather than the money going to the county, it went to the City of Fayetteville, which has taken the ball and run with it. Like Rand, city leaders saw the creation of the park adjacent to the Airborne and Special Operations Museum a win/win for the city’s historic downtown and the veterans who will make their way here for a visit.

According to Craig Hampton, who works on special projects for the city, the placement downtown is “dynamic.” Hampton noted that as the park grows, it will eventually connect to the ASOM, Festival Park and Freedom Memorial park via walkways and bridges.

The initial phase of construction will open during a special ceremony on Monday, July 4, that will feature participation by national, state and local veterans organizations, representatives from all ﬁve branches of the military and politcos, including N.C. Gov. Beverly Perdue; Joe Riojas, assistant secretary, U.S. Department of Veterans Affairs and Mayor Tony Chavonne, City of Fayetteville. A special guest at the event will be Lt. Gen. Frank Helmick, who is currently in Iraq. Helmick will take part in the event via VTC. In keeping with the patriotic theme of the event, the 82nd Airborne Division Ceremonial Band and the All American Chorus will perform in the new N.C. Veterans Park Amphitheatre.

Following the dedication of the park at 10 a.m., the public will be invited into the park. Organizers are going a long way to make sure the day is one to remember and will provide free hotdogs, ice cream, lemonade and cake to those in attendance. And while the food is an added bonus, the majority of those in attendance will come to marvel at the park and the way it has transformed, yet again, the city center.

Phase 1 of the park consists of 4.5 acres on the southside of Cross Creek. It showcases 10 water features, a visitor’s center, amphitheatre and boardwalk.

According to Hampton, “It has lots of architectural elements in it. The elements convey what the story line says: Respect, honor and pride that the people have in their veterans.”

Hampton said the park is intended to be an “urban oasis,” that allows visitors to reﬂect, relax, enjoy and bond with their fellow veterans. It is a place where they can share their stories and their experiences, and it invites them to take pride in their service, and allows the community to honor them for it.

One of the unique elements of the park is the vast use of public art.

“Public art — in this case — has a broad deﬁ nition,” explained Hampton. “Almost all of the things in the park have been designed to be appealing and have meaning — in short, the whole thing is public art.”

Of particular note is the Oath of Service Wall, where the casted hands of veterans from all 100 counties will be on display. This project, under the oversight of the Arts Council of Fayetteville-Cumberland County, and in particular, Fayetteville artist Soni Martin, truly deﬁ nes what the park is all about.

On the wall, there are the hands of 100 N.C. veterans, who range in age from 20 to over 100. Each hand is raised, much as it would have been when the veteran took his oath of service. There are 99 right hands on the wall, and one left hand. As Martin, explained, “The one man didn’t have a right hand, or a leg for that matter, he lost it in defense of our nation.”

For more on the park, visit the website at www.ncveteranspark.org and look in next week’s edition for more on the art, artists and opening.