Don’t Bring a Gun to a Bomb Fight

In or out of 30 Minutes or Less, (83 minutes) Jesse Eisenberg really is just a complete and utter waste of space. I am well aware that he 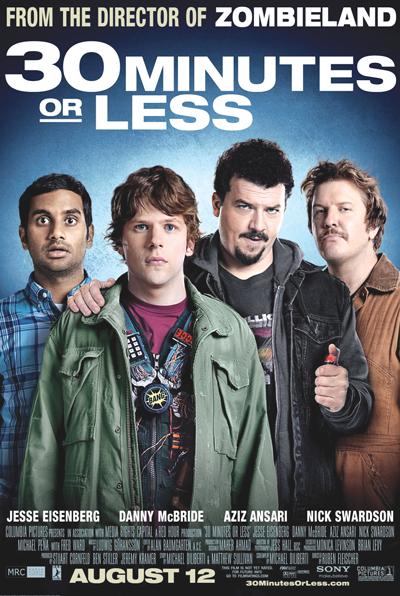 was in Zombieland (the first collaboration between this actor and director). He gets absolutely no geek credit for that one. It was not cool because he was in it, it was cool in spite of the fact that he was in it. He is obnoxious, arrogant and pathetic in even his smallest of roles. In fact, whatever small success he enjoyed in The Social Network was primarily due to the fact that it did not require him to act much at all. He only had to act smart. Because he is not smart. He is stupid.

Speaking of stupid people being stupid, whose bright idea was it to write a movie based on an incident in which an actual person actually died in a pretty horrifying way and then claim that the movie, which was obviously based on this event, was not, in fact, based on this event? I’d call that a Jesse Eisenberg level of stupid.

Nick (Eisenberg) is a pointless character. Even though most pizza places have long since discontinued their 30 minutes or less policy due to legal liability issues from all the school children who were run over, he is still following the 30 minutes or less policy. Because he can’t find a better job, and the high point of his day is speeding through intersections and missing his delivery deadlines. That may not sound like much, but it does allow him the satisfaction of tricking pre-teens into paying for pizza they should be getting for free.

Other than that, he doesn’t do a whole lot. He hangs out with his good buddy Chet (Aziz Ansari), at least until he finds out that Chet caused his parents’ di-vorce and Chet finds out about Nick’s secret crush on Chet’s twin sister (Dilshad Vadsaria). The timing of their big friendship-ending fight seems a little off, and it is never really clarified how two guys who seem to pretty much hate each other have managed to stay friends for so long. Not that either one of them really sells the hating. And as much as I enjoy Ansari in his nicely delimited role on Parks and Rec, he is not the break-out star that everyone wants him to be. He always plays the same character, and while he might be a bright spot in this film, that’s mostly because this film isn’t all that great.

Toss into this mix Dwayne (Danny McBride) and Travis (Nick Swardson! Someone I actually like!). Dwayne is an amalgamation of several kinds of entitled jerk — the kind that is always unwilling to work an actual job, but totally willing to whine about how the people he is sponging off of won’t let him spread his wings and fly. Danny McBride seems to be under the impression that this is a totally original character. He also seems to think he is really, really, funny. He is wrong on both counts.

Dwayne sees his father (Fred Ward) as the engineer of all his troubles, so he plots with a stripper (Bianca Kajlich) to hire an assassin (Michael Pena). The two halves of the movie finally meet in the middle. Dwayne needs money to pay the assassin, and Travis is an explosives expert (Of course. Of course he is.). So they plan to get a pizza delivery guy, strap a bomb to him, and threaten him with a fiery death so he will rob a bank to get them the assassin’s fee.

Poor dumb Nick is that pizza delivery boy. He manages to make up with Chet, and they embark on a crime spree. Things get steadily more complicated, and ev-eryone on the screen ends up yelling at everyone else. Note to the Director: People yelling at me is not funny and does not make me laugh. Also, Jesse Eisenberg is stupid and you should stop putting him in your movies.