The Best Christmas Pageant Ever Returns to the CFRT 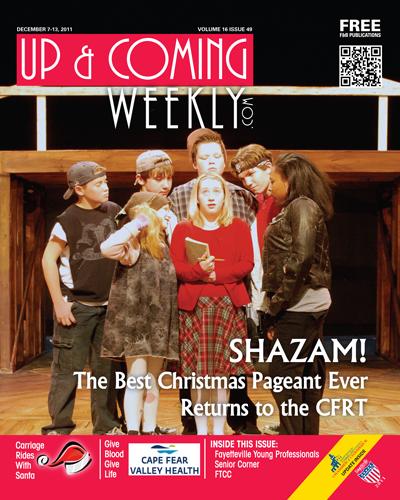 For the past 20 years, Christmas in Fayetteville has meant a staging of The Best Christmas Pageant Ever by the Cape Fear Regional Theatre. So, it seems a little unusual that the theatre’s new artistic director, Tom Quaintance, would choose to direct this tried and true show as his ﬁrst venture on the stage after taking the reigns from Fayetteville’s First Lady of Theatre, Bo Thorp

.But there is a method to Quaintance’s madness. What others may see as a baptism by ﬁ re, Quaintance sees as an opportunity to understand the heart and soul of the community — it’s families.

With that in mind, Quaintance jumped feet ﬁ rst into what may actually be one of the most difﬁ cult shows produced by the theatre annually. Forget about the musicals with their demand for a range of vocals and dancing. Forget about the gripping dramas. The Best Christmas Pageant Ever presents a challenge that is unique. Quaintance had the dubious honor of watching the auditions of almost 300 of the county’s children, and then culling that number to about 180, and then, directing, not one, not two, but three separate casts in this year’s production of the county’s most beloved Christmas performance.

This is not a task for the weak of heart. Quaintance saw it not so much as a challenge, but as an opportunity.

“There are a couple of reasons why I wanted to direct this show,” explained Quaintance during a recent interview. “First, I felt my principal job coming in was getting to know the community, because that’s what this theatre is about — community.

So, Quaintance saw the chance to work with 180 plus children as a good way to start.

“I felt like this would give me the opportunity to get to know the families — one of the primary reasons I am here is because this is such a family-centered community,” said Quaintance, whose ﬁrst child was born late this summer. 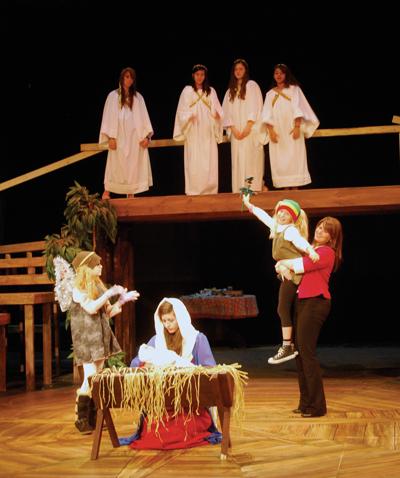 As an educator for more than 13 years, Quaintance also saw the opportunity to work with children tremendously exciting.

During the weeks of rehearsal leading up to the opening of the show this week, Quaintance has learned a few things about our community.

“The children have conﬁrmed what I expected coming in,” he said. “This community is hard working, enthusiastic and appreciative of a high standard and good work. All of these kids want to do good work. In doing this show, they feel like they are a part of something that matters. Everybody from the smallest Baby Angel to the Herdmans has worked very hard.”

Quaintance’s second reason for choosing to direct the show is a love of the story.

“The Best Christmas Pageant Ever is the story of why we do theatre It’s a about transformation,” he said.

In recent years, directors have taken the show to an edgier side. Quaintance elected to get back to basics — “let’s tell the story” has become his mantra.

“This is the ﬁrst time I have directed this show, so the ﬁrst thing I did was read the book” he said. “It’s a sweet story, but it is sharp, too. It’s not a sappy story, it’s really a great story about how outsiders are treated and how these ‘supposed good people’ treat those who are different It makes you question the labels, and is a surprisingly sophisticated show, while at the same time being tremendously fun with a beautiful message.”

Quaintance has made sure the actors in the play understand the message. Rehearsals have been part discussion and part acting.

“Are the Herdmans really just bad?” Quaintance asked the cast one Friday afternoon.

They quickly answered with a resounding “Yes.”

“Really?” asked Quaintance. “Listen to the way these good girls talk to and about the Herdmans when adults are present. How do you think they talk to them when they aren’t around?”

Wheels started turning in the heads of the cast, and as the discussion developed, the light went on. The kids started questioning who the real bullies were. 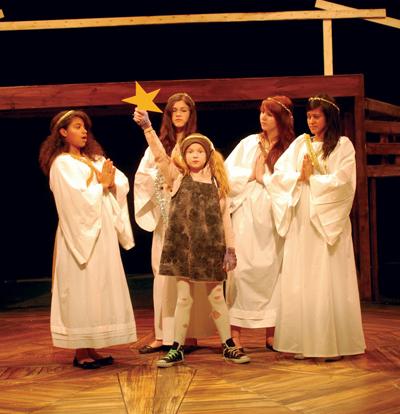 “I think the story is not just about the Herdmans transforming. It’s about the community’s transformation, not only in how they treat people, but also in how they view Christmas. The pageant has become something done by rote, with no meaning. The Herdmans come in with this completely unjaded view of the pageant. They want to know what it means. They want to get it right. They feel something. And in wanting to get it right and understand the miracle of Christmas, everybody goes on this journey.”

The Best Christmas Pageant Ever opens on Thursday, Dec. 8 and runs through Dec. 18. Tickets are $12 for adults and $10 for children. For tickets and show times, visit the CFRT website at www.cfrt.org.

Photo: (Middle right) The story is not just about the Herdmans transforming. It’s about the community’s transformation, not only in how they treat people, but also in how they view Christmas.  (Bottom left); Quaintance has made sure the actors in the play understand the message. Rehearsals have been part discussion and part acting.