So That’s What It’s About! 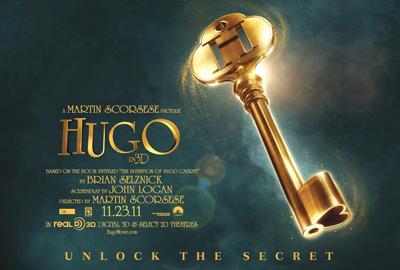 For some reason I was convinced that Hugo (127 minutes) was a cartoon of some kind. Also, I had no idea about the plot or central conflict. This is very weird because it is based on an award winning children’s book, The Invention of Hugo Cabret. I usually have a pretty good idea of what is going to happen in based-on-a-book movieS because I have generally read the book prior to the film being made, or I read the book as soon as I found out it was good enough to make a movie out of it.

In this case, I went into the theater with no idea what was going to happen, which was a nice change. I hoped for some fantasy elements, and I was very surprised to find the story telling a real-life tale. While this was not an obvious Martin Scorsese film, he did interesting things with the material. I am not sure if he added all the borderline child abuse, or if that was part of the original story, but I did have a bit of a problem with the fact that the supposed “good” characters were so ready to ignore a skinny kid running around a train station in winter without warm clothes.

The story opens in a 1930s Paris railway station. Hugo Cabret (Asa Butterfield) wanders around the enormous clock system, where he has made a home among the gears. A security guard (Sacha Baron Cohen) with a vendetta against orphans chases Hugo while working on his own little romantic subplot. Little by little, we find that Hugo was living with his father (Jude Law), a clockmaker, after the death of his mother. His father was killed in a bizarre museum fire, and his evil uncle (Ray Winstone channeling Bob Hoskins) becomes his legal guardian. I kept wait-ing for a subplot where the father wasn’t really dead and Evil Uncle had kidnapped Hugo, but it never materialized.

In between these snippets of backstory, Hugo (apparently now alone in the train station) steals food and tools to work on an automaton his father was restoring. Early in the film, he is caught by a toy-stall owner named Georges (Ben Kingsley), and the notebook he is using to guide the restoration of the automaton is taken. While events later in the film try to put this seemingly cruel action into context, as a whole the film does not sell Georges as a sympathetic character filled with righteous, inconsolable tragedy. From start to finish, I was left with the sense that I wanted to hit him repeatedly upside the head until he could develop a sense of propor-tion. I kept thinking there would be a good reason that a toy seller raising a child of his own (Isabelle, played by Kick-Ass cutie Chloe Grace Moretz) would ignore another child so clearly filled with misery, but nope. The character really comes off like a self-centered jerk.

Anyway, at least Isabelle is willing to inquire about where this kid is sleeping at night, and to attempt to undo the hideous emotional scars her guardian inflicts with his callousness. The two manage to uncover some family secrets related to the automaton, and this sends the film into a new direction.

Hugo is an adventure tale with a touch of historical fiction. Overall, it tells a nice family story with intergenerational appeal, more or less likeable characters, and a satisfying ending that avoids too much sentimentality. For those of you who care, there are some fairly obscure cameos worth looking out for. And FYI, according to IMDB.com Butterfield is going to play Ender Wiggins in the Ender’s Game adaptation! Look that up now if you don’t already know about it!