Get ready! The East Coast Step Show is back, and even better, bringing Fayetteville captivating stepping at the Crown Coliseum on March 31.

Stepping, for those not in the know, is a form of percussive dance in which the participant’s entire body is used as an instrument to produce complex rhythms and sounds through a mixture of footsteps, spoken word, and hand claps. Though stepping may be performed by an individual, it is generally performed by groups of three or more, often in arrangements that resemble military formations. Historically, it is linked to the ﬁrst historically Black Greek organizations, with the ﬁrst mention of stepping occuring in the 1920s.

The East Coast Step Show dates back to 1998. It is one of the longest running step shows in the country and has attained glowing reviews since the event’s inception. Richard Smith, team coordinator for The East Coast Step Show, says that the ﬁrst three years the step show was held at Fayetteville State University, but was eventually moved to a larger arena because of its growth.

“We had to move locations because the crowd got bigger and we needed more space,” Smith says, “We eventually came to the Crown Center and have been here ever since.”

The East Coast Step Show is performed in Rocky Mount, N.C., Florence, S.C., and of course, Fayetteville. The show has had the privilege of presenting teams from all over the country, showcasing their talents in the art of stepping.

“It gives people the opportunity to view a wide range of step teams from all over that bring their own ﬂavor,” Smith says, “It will be very eventful for everyone.”

There will be a panel of judges, as well, that will choose the best team in the country and on the east coast.

“It is kind of like American Idol,” Smith explains. “Our judges consist of alumni members and they will observe the team’s performance to make their ﬁnal pick.”T

he winning step team will be awarded cash prizes. This money is given to help the teams give back to the community by donating to charities, mentoring youth and for community projects. Of course, the show is to bring entertainment to the community, but the step show has an even bigger mission.

“We want to bring about awareness through the culture of stepping,” Smith said.

The step show will allow the audience to get closer to Greek Life and gain that unique experience by viewing some of the best step teams in their state. Some of the teams that will attend are from the University of Maryland, Claﬂ in University, Virginia State University, New Jersey, Florida, Virginia, Georgia and North Carolina.

“Each year we like to spotlight local elementary and high school step teams,” Smith adds.

This year the Legacy Step Team from E.E. Smith High School and the SWA Elementary Steppers in Lumberton will h 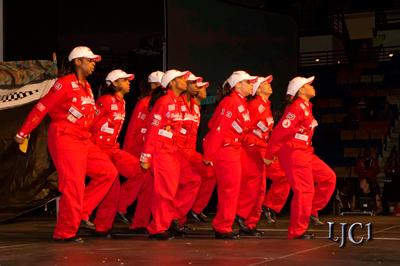 “We always like to bring musical talent to the show,” Smith adds, “it’s something that we like to give back to the youth.”

The show starts at 6 p.m., with doors opening at 5 p.m. For more information, contact the Crown Coliseum at 438-4100 or visit www.atthecrown.com.