What if Stadium Economic Residuals Fail? 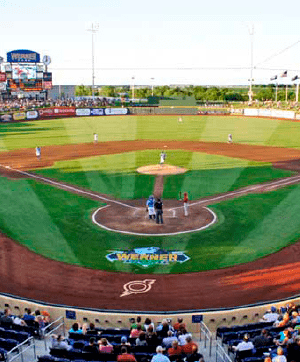 The Fayetteville City Council wants the public to know that building a downtown minor league ballpark is the nucleus of a major economic development plan. Projects totaling $100 million are linked to the proposal, which has been in the making for three years. The stadium itself is a $33 million public/private partnership. Funding details are still being worked out. A Durham developer plans to spend $15 million to refurbish the adjoining Prince Charles Hotel building. The same developer has an agreement with the city to spend $60 million to develop 2.5 acres in the same triangle. It’s fairly common for communities to leverage sports stadiums in such a way.

What if the development goes bad? We don’t know what city council will come up with to fund the stadium, but observers trust the financial plan will shield taxpayers and isolate risk even if the development fails to take off. When the Class AAA Omaha, Nebraska, Storm Chasers were looking for a new home, the town of Papillion, a suburban community south of Omaha, came forward with a ballpark plan with an economic development component. The new ballpark opened in 2011 and has been a big success. But, the ancillary development hasn’t happened. Part of it is location because the ballpark is just outside the main centers of development in the area. There were big plans for an entertainment district, but those plans have not panned out. The Fayetteville/Cumberland Arts Council has high hopes for a downtown entertainment district with the stadium being an important part of it. One idea that may be under consideration locally is creation of a tax increment finance district underwritten by tax-exempt warrants and bonds sold to investors who take the risk, not taxpayers. In North Carolina, the implementing legislation labels this form of financing “project development financing.” Whatever creative funding ideas being considered by a city council stadium committee are unknown. The committee has been meeting privately for weeks and has not yet fully developed a funding plan.

Little infrastructure work is needed in the downtown area where the ballpark would be built. In Omaha, a public/private partnership spent $29 million to build the Class AAA stadium. That’s less than what Fayetteville proposes to spend on a Class A ballpark. How the city proposes to pay off the debt is also a mystery. The new stadium in suburban Omaha itself is doing very well. “Our revenues are coming in even without any development at the ballpark,” said Brian Hanson, the county’s fiscal administrator. “They’re coming in and covering our debt payments.”  The lesson learned in the Omaha project is that the ballpark deal was structured to pay for the facility, create an environment for future success while protecting taxpayers in the event the economic development didn’t work out.