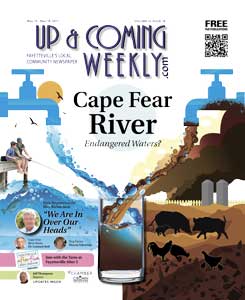 “The nation behaves well if it treats the natural resources as assets which it must turn over to the next generation increased and not impaired in value.” – Teddy Roosevelt

North Carolina has the fourth largest estuarine system in the world. Consider the possibilities that such a system offers a nation, much less a state; it boggles the mind. North Carolina has a system perfect for economic growth made simple: it should host clean jobs and economic overlay districts that act as economic and recreational paradises.

But something is amiss. The inshore fishing is off. Sportsmen who should be in North Carolina are flocking to Louisiana, Florida and Virginia — not North Carolina.

There are other downward trends exacerbating this problem. Wake County is witnessing unparalleled growth. Apparently, the pressure is so great in Wake County to find water that the main solution to their crisis is with interbasin transfers. They take our water, use it and place it back into the Neuse River, never even putting it back where they got it. With lax policies on water, we now claim two of the top seven most-polluted rivers in America.

• North Carolina has two rivers in its Coastal Plain region that rank in the top seven worst polluted rivers of our country: The Cape Fear and
the Neuse.

• From Maine to Texas, we are the only state that allows unrestricted gill netting and shrimp trawling in our rivers and sounds; this devastates weed beds and oyster beds. For every pound of shrimp caught, these practices kill five pounds of juvenile fish.

• Wake County adds 73 residents daily, which places enormous pressure on the state’s water capacity. Interbasin transfers are taking our water from The Cape Fear River and putting it into the Neuse River.

• We have lost 90 percent of our oysters in
Pamlico Sound.

• The Marine Fisheries Commission is so inept that when it does attempt to protect weed beds and oyster restorations, the commercial industry simply waits until dark, goes into the area, removes the buoys and then trawls into the area until there is nothing left but sand.

• We have 15 saltwater fish species that are so reduced, we cannot count them adequately.

• In three rivers — the Neuse, Tar and Cape Fear, we have less than 5 percent wild, native-DNA striped
bass left.

•  In a 40-mile radius, we produce and place the second largest hog and third largest poultry wet animal waste deposits into shallow lagoons and the state’s shallow water table. This procedure
concentrates pathogens, waste bacteria and antibiotics — all of which promote algae blooms in our rivers.

The 2,000 Pound Elephant in the Room Is Fort Bragg’s Future

Here’s a sobering thought: The sixth largest employer in our state could very well leave North Carolina, not because of space or lack of friendly effort from our city, county and business community. Rather, it could leave because of ignorance on our part that we have assumed our water is unlimited. It is not.

Our General Assembly chooses not to use scientific data when measuring the health of our water, but the U.S. Army will. Campbell University’s School of Medicine, when working at the Cape Fear Valley Regional Medical Center as a residency program, will. Businesses coming in for clinical trials will. Simply put, we could easily bankrupt our future.

Imagine in 10-15 years a Fayetteville without Fort Bragg. Imagine Fayetteville without Goodyear or the Campbell University residency program. Imagine Lee, Harnett, Cumberland, Bladen, Columbus, Pender and New Hanover counties without sufficient water sources to fish in, much less drink from. It is, in fact, a possibility. The facts are the facts; equally so is the truth. The truth is that we can turn these problems around. Our problems are mostly man-made and therefore can be solved by man.

We must cap interbasin transfers by negotiating if possible. If it persists, we should head downstream on the Neuse River, place large pumps just below where our water is released and pump it back in the Cape Fear River basin.

Secondly, we need to clean and replace the water we use and do so properly and promptly.
Thirdly, we must engage proactively and adopt long-range plans for our use of water for growth, quality of life, recreational purposes and the future.

Finally, we can at last have full use of our river by adopting a complete overlay plan for common-sense development so our citizens can both enjoy and economically benefit from our beautiful river and estuary system. We have the overlay, but we get in our own way by allowing personal relationships to interfere with the overall good of our community development. Hence, we are still without our river overlay, causing development to sit idle, all for
a junkyard.

If we intend to pollute, then let’s do so honestly. But let’s honestly plan and use our water to its fullest. Eastern North Carolina has, over the last 25 years, endured water policies centered on the refusal to change and fix our state’s water.

The Marine Fisheries Commissions is the laughing stock of the nation’s enforcement arm for saltwater fisheries. Two simple concepts should govern policy. We are presently operating at over 60 percent use of our water. Unintelligent use and pollution only hasten full capacity. Because of this, we must revisit all water pollution.

Finally, we must align ourselves with friends of water. Ducks Unlimited, Sierra Club, commercial and sports fishermen, N.C. Riverkeepers, Waterkeepers Carolina and other cities and counties downstream must unite. Those groups have bipartisan support and represent large numbers of people connected to our estuarine system.

Our job is to insist Raleigh put the water it takes from our basin back into the Cape Fear basin after they have fully treated it. A fact staring our water in the face is that in five years, Raleigh-Charlotte will be larger in population than the rest of the state combined. Can you imagine the pressure that Raleigh’s growth will put on our water in such numbers? Simultaneously, we must cure pollution, develop long-range planning, encourage conservation easements and restore our depleted shellfish, fish and weed beds.

Dohn Broadwell, a former developer, outdoor enthusiast and friend, lived a life that exemplifies our solution. He spoke out, in his own way. He was an example of responsible growth. He used the water but cared for it. He enjoyed our estuary system to its fullest, hunting, fishing, canoeing and watching the sun rise over Pamlico Sound — just in awe of nature and just enjoying the outdoors. He left our estuary system better than he found it.

He was active in Ducks Unlimited, left extensive conservation easements and advocated for the environment’s health. He invested not just in water; he invested in the future of our youngsters.