A Cemetery Is One of Fayetteville's Historic Landmarks 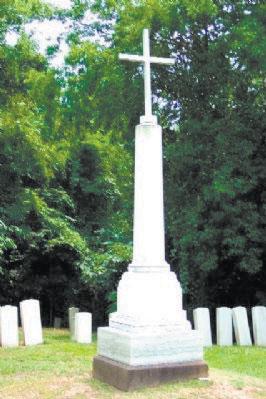 Tedious restoration and repair work in Fayetteville’s historic Cross Creek Cemetery Number One downtown has been completed. An artisan hired by the city spent months resetting headstones, setting monuments upright that had fallen, repairing cracks and even locating stones that had sunk into the ground.

The City of Fayetteville owns Cross Creek Cemetery Number One and four others. “That’s rare because only a few cemeteries are municipally-owned,” said City Historian Bruce Daws.

Cross Creek Cemetery Number One, located at N. Cool Spring and Grove Streets, is among the oldest in North Carolina. The others stretch along Ann Street from Grove Street to beyond Lamon Street. Number One was established in 1785, following the American Revolutionary War. Some markers date to 1786 and are the graves of Revolutionary War dead.

The cemeteries are managed and maintained by the cemetery office of the Fayetteville/Cumberland Recreation and Parks Department. Cross Creek Cemetery Number One was added to the National Register of Historic Places in September 1998 as a national historic district. “It’s one of Fayetteville’s most significant historic landmarks,” Daws said. “Being listed on the national registry is a big deal because cemeteries are rarely considered for the honor,” he added.

Following the Civil War, the Ladies’ Memorial Association of Fayetteville had soldiers who had been killed in battle — along with those who had died and been buried in various nearby locations — interred or re-interred in the cemetery. The group raised funds to erect a Confederate Soldiers Monument in the cemetery. It was crafted by noted Scottish stone mason George Lauder and is believed to be North Carolina’s first Confederate monument, dedicated on Dec. 30, 1868.

In 1915, the General Assembly created the Cross Creek Cemetery Commission to provide for the graveyard’s upkeep.

Brookside is an area of Cross Creek Cemetery dedicated to burials of post-Civil War African-Americans. It contains the graves of many notable families of the Fayetteville area. They include E.E. Smith, members of the Chesnutt family, Dr. Paul Melchor, Robert Harris, the first principal of the Howard School and Bishop Hood. The grounds consist of free blacks buried after the Civil War and others born during the days of slavery.

Cross Creek Cemetery Number One, and to a lesser extent Number Two, has been desecrated by vandals from time to time. In 2001, Daws and then-City Councilwoman Betty Milligan toured the grounds noting significant damage. Milligan called for security fencing to protect the sacred property. In June 2010, more than 50 headstones were damaged and in disarray following another period of vandalism.

Finally, in 2013, a massive eightfoot wrought iron fence was installed around the perimeter of the cemetery. In 2016, the city installed fencing across Grove Street along the front of Cross Creek Cemetery Number Two to discourage vandalism there. “Since their completion, there has been no vandalism in the cemeteries because vandals can’t cut through them now,” said Recreation and Parks Director Michael Gibson.

The other three cemeteries are not fenced because officials said they are not as vulnerable to vandalism. Daws noted that Cross Creek Cemetery Number One sees regular tours of students attending high school humanities classes. “It’s a museum of Fayetteville’s history,” he said.