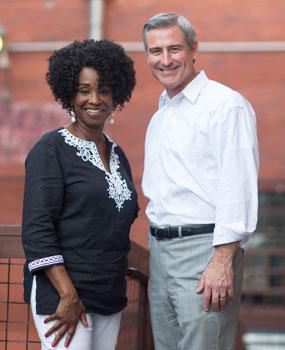 The City of Fayetteville’s 2017 municipal primary election is just days away. The mayoral race once again dominates the pre-election day frenzy. Two of the four candidates will be eliminated on Oct. 10. Two-term incumbent mayor Nat Robertson seems confident and reportedly is holding off a media blitz until after the primary.

Councilman Kirk deViere is seeking the office a second time. He was eliminated in the 2013 primary by Robertson and then-councilwoman Val Applewhite. Robertson went on to win the general election by a narrow margin. deViere publicly accused Applewhite of mudslinging in that race. The two have apparently patched things up. In a mailer, deViere and Applewhite are pictured together, and she asks her supporters to “stand with me one more time and help elect Kirk deViere mayor.”

U.S. Army Beefs Up Aid to Puerto Rico
The Pentagon is shifting its response to Hurricane Maria-ravaged Puerto Rico to a land-based operation as it clears airfields and adds communications capabilities.
U.S. Northern Command has sent 16 Army helicopters to Puerto Rico, including eight Blackhawks and their crews from Fort Bragg’s 82nd Airborne Division. The Army is also sending a segment of a sustainment brigade of 1,000 soldiers who specialize in distribution of goods in hostile environments to the U.S. territory of 3.4 million people.

Retired Lt. Gen. Russell Honore, who coordinated the military’s response to Hurricane Katrina, has been sharply critical of the federal government’s slow response to the humanitarian needs of the 3.5 million Americans stranded in Puerto Rico. “The president again has shown he doesn’t give a damn about poor people and people of color,” Honore said in a CNN interview. Lt. Gen. Jeffrey S. Buchanan, commander of U.S. Army North (Fifth Army), has recently been dispatched to take charge of ground recovery operations.

Part-Time Job Opportunities
The Fayetteville Cumberland Economic Development Corporation has announced that Issues & Answers Network, Inc., a global marketing research firm, will open a location in Fayetteville in the coming months. This new facility will employ 50 or so part-time workers as well as offering a few full-time management opportunities. The company said it may eventually employ 300 people in its call center on the second floor of Hamrick’s Department Store on McPherson Church Road. Call center interviewers will be paid a bit more than minimum wage. They will have no benefits.

Law Proposed to Protect DACA Children
U.S. Senators Thom Tillis, R-N.C., James Lankford, R-O.K. and Orrin Hatch, R-Utah, have introduced the Solution for Undocumented Children through Careers, Employment, Education and Defending Our Nation Act, or SUCCEED for short. They believe it’s a solution to address legal uncertainties facing undocumented youngsters and young adults who were brought to the United States as children.

Tillis described the legislation as a “fair and compassionate solution that requires individuals to demonstrate they are productive and law-abiding members of their communities to earn legal status.”

The proposal provides a fair but rigorous track for undocumented children to qualify for conditional permanent resident status. They must have high school diplomas or equivalencies, submit to international criminal background checks, be gainfully employed and be prepared to enroll in postsecondary or technical colleges.

Womack Retiree Appreciation Day
Fort Bragg will host a Womack Army Medical Center Retiree Appreciation Day Oct. 20 and 21. On Friday, a retiree golf tournament will be held at Stryker Golf Course from 7 a.m. to 3 p.m. A Garrison Commander’s Retiree Town Hall is scheduled at the Iron Mike Conference Center from 10:30 a.m.–11:30 a.m.
Retiree Appreciation events on Saturday, Oct. 21, include health screenings from 8 a.m. to 2 p.m. in the hospital’s clinic mall. The event will be open to retirees and their families. Services offered will include physical therapy information, mammograms, vision and hearing screenings, blood pressure screenings, flu shots and other vaccinations, tobacco cessation support and more.

Fayetteville Joins Research Group
The City of Fayetteville has been selected to join What Works Cities, the largest philanthropic effort to improve the effectiveness of local governments by enhancing their use of data and evidence. Winston-Salem, Cary, Baton Rouge, La., and Hayward, Calif. were the other cities chosen to participate in the initiative.

The What Works Cities project will help refine a comprehensive set of performance measurements for stormwater projects and operations that will assist in making evidence-based policy decisions. It will allow the city to better communicate the efficiency and effectiveness of its fledgling stormwater program to residents. “The City of Fayetteville is very excited to be chosen as a What Works City,” said Rebecca Rogers Carter, performance analytics director. “The City prides itself on being an engaged leader in the community for innovation, effective change management and continuous improvement strategies.”

Launched by Bloomberg Philanthropies in April 2015, What Works Cities is now partnering with 90 cities across the country. Cities are teaming up with What Works Cities’ expert partners to develop the skills to apply data-driven tools such as performance management and results-driven contracting to their most pressing challenges. For more information, visit www.whatworkscities.org.