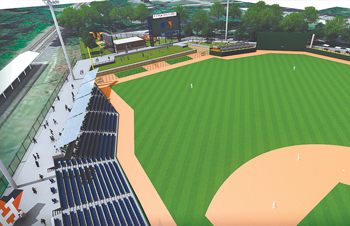 “We expect to sell out every game.” These are the words of Fayetteville Woodpeckers President Mark Zarthar at an April 9 news conference. The April 18 opening game is a sellout. Zarthar said Segra Stadium could accommodate up to 6,000 fans. Its official capacity is 5,200. He said he isn’t the least bit worried about parking, noting that a five-minute walk to the stadium is part of the fan experience.

City officials contend there are 4,360 public and private parking spaces within five to seven minutes of the stadium.

City spokesman Kevin Arata said he doesn’t expect finding available parking will be a problem. “People will figure it out … they’re smart,” he said.

The city will charge $10 for each of the 1,100 parking spaces in the 12 controlled parking lots. They will be clearly marked with temporary roadside signs. “Paid parking will begin two hours prior to the start of the games,” Arata said.

One hundred and four handicapped parking spots for the disabled will be provided in the two parking lots behind city hall off Franklin Street. Six hundred on-street parking spaces will be free during ballgames. Arata said the city has no control over what property owners decide regarding their private lots. He noted that officials have been in touch with owners and await their decisions.

Hay Street between Winslow Street and Ray Avenue will be closed to vehicular traffic on game days to create a safe pedestrian zone.

“We will monitor activity for the first month during the construction period,” said Police Chief Gina Hawkins. “We want traffic to have the least impact on the downtown area as possible.”

She and city traffic engineer Lee Jernigan noted that new marked, signalized crosswalks should make things easier for pedestrians. They added that adjustments will be made as needed in efforts to make citizens feel welcomed and encouraged to return for future downtown events.

The first Fayetteville home game will be at 7 p.m., Thursday, April 18, versus the Carolina Mudcats from Zebulon, North Carolina. The Woodpeckers are a Carolina League, Class A Advanced minor league affiliate of the Houston Astros. It is one of two expansion teams that increased league membership to 10 teams in 2017.

Former Fayetteville Deputy City Manager Rochelle Small-Toney now serves as the city manager of Rocky Mount. Before her departure in 2017, Small-Toney served as project director for Segra Stadium. As she tells it, former City Manager Ted Voorhees challenged her to come up with an economic development project for downtown Fayetteville. She suggested minor league baseball — and subsequently oversaw all phases of the stadium project, including the feasibility study, recruitment of the Houston Astros minor league team, development of the memorandum of understanding and the creation of a 30-year financial plan.

The stadium and nearby mixeduse commercial property are near completion in downtown Fayetteville.