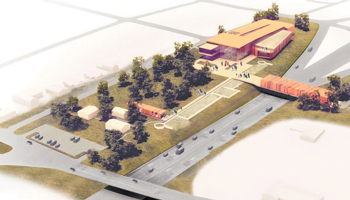 Local supporters of the proposed North Carolina Civil War and Reconstruction History Center seem confident that the legislature will commit to significant funding this summer. Rep. John Szoka, R-Cumberland, filed a bill early this month that would provide $55 million in state funds for the project.

Szoka is a senior House Finance Committee co-chairman. His bill would dedicate $10 million for the History Center in the 2019-20 fiscal year and $45 million in the following fiscal year.

“We’ve done the planning, we now need construction funds,” said Mac Healy, president of the History Center board of directors.

Healy said the longer the project is delayed, the more it will cost. The original estimate was $65 million. Szoka’s bill estimates the current cost of the complex and a statewide digital education network at $80 million.

The public education network is a significant element of the expense, said Healy.

So far, approximately $27 million has been raised or pledged, including $15 million in city and county government commitments. Szoka asked that a companion bill not be filed in the Senate and that he be allowed to steer his measure through the house. Sen. Kirk deViere, D-Cumberland, confirmed if passed in the House, the Senate would take up the measure. “There is a lot of activity between House, Senate and Gov. Cooper before we get to a signed and approved budget,” deViere said.

Officials stress that the history center will not be a museum with military artifacts. Instead, it will tell the story of North Carolinians during the last half of the 19th century, including soldiers and civilians, their families, enslaved Americans, black soldiers and whites who fought on both sides of the War Between the States.

The History Center would be the first in the nation to focus on the impact of the Civil War and its aftermath on a state’s people. A comprehensive plan developed eight years ago resulted in a concentrated effort to transform the state-supported Museum of the Cape Fear Historical Complex into the History Center. The facility will be built on the site of the historic federal arsenal in Haymount, which was captured by the Confederacy soon after the war broke out.

The four-acre site at the end of Myrover Street will include a 60,000-squarefoot visitor’s center. It will protect the remnants of the fortress leveled by Union forces during William T. Sherman’s return march from Atlanta at the end of the war. The existing 1896 E.A. Poe House and three Civil War-era houses will be incorporated into the plan.

This project offers North Carolinians historic information and context for it. The History Center is designed to be a school of sorts rather than a collecting museum. It will display only those artifacts that advance its mission of telling the story of the Civil War and Reconstruction in North Carolina.

From the beginning, the History Center’s planners understood that students from across the state would benefit from the use of technology. So, they created one of the nation’s first digital master plans to make this resource accessible to all.