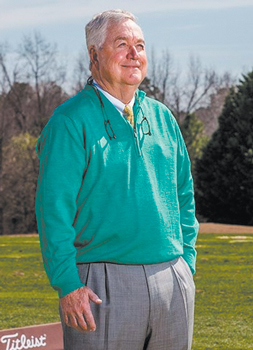 With a paper roadmap folded on the dashboard of a rental car, Jerry Hogge logged hundreds of miles in a three-week span up and down the East Coast to spread the word about Methodist University’s professional golf management program. That was in 1988.

“I went from here to Portland, Maine,” he said. “I was on Long Island, in New Jersey, in Delaware and Virginia. I visited just about every kid we had that summer doing internships.”

Since then, the program has graduated more than 1,100 students, each of whom has landed a job in the profession. Methodist alumni now lead some of the most prestigious golf courses in the world, from Baltusrol Golf Club in New York, site of the 2016 PGA Championship, to Oakmont Country Club in Pittsburgh, Pennsylvania, site of the 2016 U.S. Open.

After 32 years as the program’s director, Hogge, 72, is stepping aside to take on a new role for the school. Methodist’s Board of Trustees named him director emeritus.

“The...title is awarded in gratitude for Jerry’s many years of dedicated and excellent work,” said Methodist University President Stan Wearden.

“During his tenure, Jerry has added immeasurable value to the PGM program and the university,” said Dena Breece, interim dean and associate dean of the Reeves School of Business, who wrote the nomination.

Every year, more than 250,000 people experience an ST-elevated myocardial infarction, the deadliest type of heart attack. They are caused by blood flow blockage to the heart and require immediate treatment. Blood flow must be restored as quickly as possible, either by mechanically opening the blocked vessel or by providing clot-busting medication.

The Mission: Lifeline Initiative provides tools, training and other resources to support heart attack care based on the most recent evidence-based treatment guidelines. The initiative also recognized emergency medical services for their efforts to improve care to rapidly identify suspected heart attacks and to promptly notify treating medical centers and their awaiting hospital personnel.

Mayor Mitch Colvin has launched a weekly Facebook Live broadcast, entitled “Mayor’s Moment.” It airs on Mondays at 8:30 a.m. Colvin hosts the program from City Hall. He asks that residents provide input on his Mayor Colvin Facebook page about issues they would like him to address during the “Mayor’s Moment.”

“In the interest of transparency, I want to hear citizens’ concerns,” Colvin said. “As mayor, I’ve always tried to make Fayetteville a better place, and it’s a constant goal of mine. So this broadcast helps me serve that purpose.” Citizens are encouraged to use Facebook to engage with the mayor every Monday during the broadcast.

The Fayetteville Area Convention & Visitors Bureau is publishing a Hope Mills Visitor’s Guide to showcase the community’s variety of entertainment and shopping opportunities. The town of Hope Mills is a family-friendly town of about 16,500 residents. Its offerings include the Hope Mills Lake, Millstone Cinemas 14, a putt-putt golf course, walking trails, a brewery, farmers markets, a food truck rodeo, two waterparks, and a variety of restaurants and shopping options.

“This is the second community-focused visitor’s guide we have produced,” said John Meroski, FACVB president and CEO. “Both the Spring Lake and Hope Mills guides showcase unique communities with plenty to offer.” The 64-page guide has a matte finish for easy note-taking.

“Thank you for providing such a wonderful guide for Hope Mills,” said Mayor Jackie Warner. The Hope Mills Visitors Guide is available at the FACVB office on Person Street in Fayetteville, Hope Mills Town Hall, the town library at 3411 Golfview Rd. and the Chamber of Commerce office at 5546 Trade St.