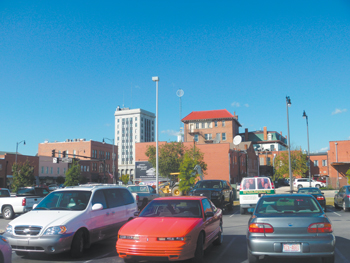 Fayetteville City Council’s plan to charge for on-street parking is still alive despite growing opposition from downtown merchants. The city plans to charge $1 an hour for people parking on the street downtown from 9 a.m. to 9 p.m. Monday through Saturday. Some council members favor allowing motorists to park free for the first hour. There are about 600 parking spots on center-city streets, according to traffic engineer Lee Jernigan. He reminded City Council at a meeting June 19 that the plan adopted recently will include paid parking downtown beginning the first of next year.

Old-fashioned parking meters will not be reinstalled. Instead, several dozen digital kiosks will be built to accept smartphone app and bank card payments as well as coins. The city is already charging $5 to park in city-owned parking lots during Fayetteville Woodpeckers baseball games.

Electronic kiosks have become popular across the country in recent years. Many communities say they raise tens of thousands of dollars in new revenue, which is one of the reasons Fayetteville leaders are moving in that direction. Fayetteville is the only large city in North Carolina not charging for on-street parking.

Businessman Hank Parfitt contends Fayetteville’s main thoroughfare, including the first block of Person Street and five blocks of Hay Street, is unlike other big cities. City Councilman Dan Culliton agrees. “We have a downtown that has been revitalized with small boutiques and restaurants,” he said.

Parfitt, who owns a business and lives downtown, said the city should have waited for the effects of Segra Stadium to settle in before imposing parking fees, which have harmed small-business owners. Both men agreed officials need to promote the use of the underutilized Franklin Street parking garage.

“We need to focus more on the parking deck, and we need to protect our businesses,” Culliton said.

Councilman Jim Arp referred to a study conducted by McLaurin Parking Management of Raleigh and renewed his insistence that the city concentrate on promoting parking turnover.

“I think a significant number of your parking spaces are being taken up by downtown employees, merchants or other folks,” said McLaurin CEO Jeff Wolfe, whose firm manages downtown parking for the city.

Mayor Mitch Colvin informed business owners and others who attended the special council meeting that no action would be taken and that it was an information-gathering session. “We want to hear everybody’s point of view,” Colvin said.

The council has not yet heard directly from downtown property owners and merchants in any of the meetings it’s held since February, when the parking issue first came up.

Downtown merchant Bruce Arnold showed Up & Coming Weekly an online petition with more than 2,500 signatures calling for free parking. He and his wife, Molly, have put their Hay Street business, the coffee shop Rude Awakening, up for sale.

Molly wrote in a lengthy Facebook entry that business has declined by 25% since parking lot fees were introduced in May.