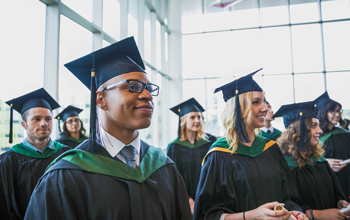 North Carolina law says that any member of the armed services qualifying for admission to an institution of higher education but not qualifying as a resident for tuition purposes shall be charged the in-state tuition rate for enrollments while a member of armed services. Dependents and spouses of active-duty service members using Post 9/11 GI Bill benefits are eligible to be reclassified under the in-state tuition rate without meeting the state’s 12-month residency requirement.

The North Carolina General Assembly passed Senate Bill 257 in 2017 to comply with federal law under Section 702 of the Choice Act. It provides a waiver of 12-month residency requirements for certain veterans and other individuals entitled to federal education benefits. In North Carolina, to qualify for in-state residency, a veteran must show that he or she established legal residence, or domicile, in North Carolina and has maintained that domicile for at least 12 consecutive months before the beginning of the term. They also must demonstrate that they intend to make North Carolina a permanent home indefinitely.

Active-duty members of the armed forces are charged in-state tuition while living in North Carolina because of their active-duty assignment in the state. This also applies to reservists, even those who are not intending to make the state their permanent home. If subsequently reassigned outside North Carolina, the members continue to qualify for instate tuition so long as they remain continuously enrolled in the program they were in before reassignment. Dependent relatives — spouses, children and siblings who share the abode of a service member who is in North Carolina on active duty — also qualify for in-state tuition rates.

Many service members seeking higher education have historically preferred community colleges. Fayetteville Technical Community College has been rated one of the best two-year institutions for service members, and it’s one of the largest in the state. FTCC is a public, two- to four-year school. Its highest level of offering is associate degrees. Tuition and fees for 2019 at FTCC are $2,544 for North Carolina residents and $8,688 for out-of-state students. The school has a total enrollment of 11,660. The studentto- faculty ratio is 19-to-1.

In October 1963, two years after the fledgling school opened, the board of trustees requested that the status technical institute be granted to the institution. The North Carolina State Board of Education did so in January 1964, and the name Fayetteville Technical Institute was adopted. The board of trustees was granted authority to award the associate in applied science degree in addition to diplomas offered in numerous programs. In January 1988, FTI became Fayetteville Technical Community College when the North Carolina Department of Community Colleges changed the name. The change was in name only though, as the purpose of FTCC remained intact.