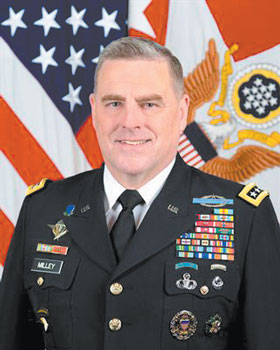 During the Clinton administration, former 18th Airborne Corps and Fort Bragg Commanding Gen. Hugh Shelton was the first airborne officer to become chairman of the Joint Chiefs of Staff. Gen. Mark Milley served as commanding general of Army Forces Command at Fort Bragg before being named chief of staff.

Trump tweeted, “I am pleased to announce my nomination of four-star General Mark Milley, Chief of Staff of the United States Army — as the Chairman of the Joint Chiefs of Staff, replacing Gen. Joe Dunford, who will be retiring.

“I am thankful to both of these incredible men for their service to our country! Date of transition to be determined.”

Milley’s military career has spanned numerous commands and staff positions in Special Forces and eight divisions, according to his Defense Department biography. Before being named chief of staff in 2015, Milley served in command and leadership positions in the 82nd Airborne Division and the 5th Special Forces Group at Fort Bragg.

In 2018, Milley was involved in deciding whether the Army would publish a controversial report on the Iraq War, a two volume, 1,300-page study. Milley reportedly decided that he wanted to read the entire 500,000-word study before deciding on publication. Milley also directed that an external panel of scholars review the work before he made a decision. The panel returned glowing reviews on the study, including one that described it as “the gold standard in official history.”

In September 2018, Secretary of the Army Mark Esper and other Army officials decided to distance themselves from the study by casting it as an independent work of the authors, instead of being described as a project by the chief of staff of the Army’s Operation Iraqi Freedom Study Group.

When confronted by a reporter with The Wall Street Journal in October 2018, Milley reversed the decisions and directed that the report be published officially with a foreword that he would write. He declared the team that wrote the study “did a damn good job,” that the study itself was “a solid work” and noted that he aimed to publish the study by the holidays (2018).

Within days of this revelation, two members of Congress who sit on the House Armed Services Committee, Reps. Jackie Speier, D-Calif., and Ruben Gallego, D-Ariz., sent a letter to Army leadership expressing their anger with the Army’s delay of publication of the report. The study was published in January 2019.