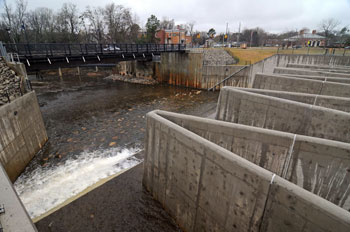 For a second time, the restored Hope Mills dam has been recognized with a national award for its design and construction. The town recently announced that the dam has been awarded the Envision Bronze Award from the Institute for Sustainable Infrastructure. Don Sisko, head of public works for the town of Hope Mills, said the award is presented to projects like the Hope Mills dam on the basis of their resilience and sustainability.

Sisko said the award was based on 64 grading criteria. The dam has already been through two hurricanes since the water was impounded behind it, but Sisko said he’s not sure if that was part of the grading criteria that earned Hope Mills the award.

In his work with the dam, Sisko said it has been relatively carefree to maintain. “You always anticipate you’re going to find a little glitch here or there,’’ he said. “As far as actual operation of the dam goes, we’ve not had any problems with that.

“We’ve done our standard maintenance. I haven’t had to do anything out of the ordinary.’’

Currently, the levels in Hope Mills Lake are low to allow for the installation of a permanent bulkhead along one shoreline, where the will public have access.

Sisko said there has been no problem during that time with dissolved oxygen levels, nor any reports of fish kills downstream from the lake. It also hasn’t interfered with any downstream work projects. 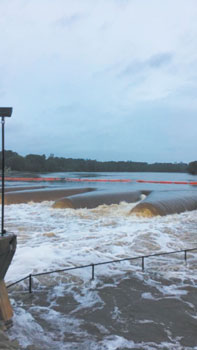 “It’s worked as advertised,’’ Sisko said of the dam. “Like I tell folks, it was designed based on good scientific practices and built on good construction practices.’’

The town’s elected leaders, including Commissioners Jessie Bellflowers and Pat Edwards and Mayor Jackie Warner, all praised the work of Schnabel Engineering and ASI Constructors, builders of the dam.

“The Schnabel engineering design team collaborated with the town of Hope Mills Lake Advisory Committee, town officials and public involvement,’’ Bellflowers said. “As a community, we are extremely proud of this national award-winning project that serves the quality-of-life needs of our community for years to come.’’

Edwards praised the members of the previous Board of Commissioners who chose Schnabel and ASI for the building of the new dam. “The people we worked with and the geniality we had with everybody, and a board that worked together as a team, you can get a lot more accomplished,’’ she said. “The dam is beautiful. I love it. Everybody loves it.’’

While proud of the award, Warner expressed sadness that town leaders like the late Edwin Deaver and Bob Gorman were not alive to see the result of their hard work.

Warner, Deaver and Gorman were part of the traveling team representing the town that went to Concord, Charlotte and Raleigh during the process of choosing Schnabel and ASI to oversee the dam’s construction.

“It would have been nice if they had been around for that first ribbon cutting,’’ Warner said of Deaver and Gorman, adding in the names of former mayors Al Brafford and Eddie Dees.

“It’s a sustainable design, meaning it should last for many years,’’ Warner said. “It has already withstood two hurricanes and a whole bunch of bad weather. I think it has taken the test already (that) you might not have expected it to take for lots of years.’’