The return of the Jay Walkers 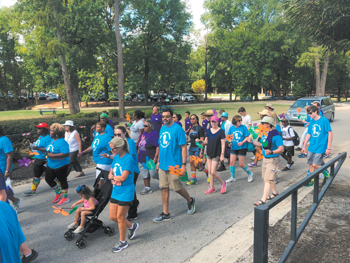 When Fayetteville Assistant City Manager Jay Reinstein revealed that he had been diagnosed with early-onset Alzheimer’s last summer, he started a crusade. The city and the community rallied around him and, with less than a month to prepare, fielded one of the largest Walk to End Alzheimer’s teams in the state. The Jay Walkers raised close to $28,000 for Alzheimer’s education, support and research at last September’s Fayetteville Walk to End Alzheimer’s. Reinstein has since gone on to serve on the national Alzheimer’s Association Early Stage Advisory Council, enabling him to educate and raise awareness on a nation-wide level.

This year, the Jay Walkers are once again rallying to support Reinstein. Tracey Broyles, budget and evaluation director for the city of Fayetteville, is team captain for the Jay Walkers. “On July 31 last year, Jay bravely shared his diagnosis with his colleagues,” Broyles said. “On that very same day, I received an email with details of the Walk to End Alzheimer’s (scheduled for) the first weekend in September. I also learned that the kickoff meeting for team captains was the very next evening.

“With the support of City Manager Doug Hewett, and Jay Reinstein and Elizabeth Somerindyke as co-captains, we began our team recruitment and fundraising efforts with a goal of $2,000 in donations. We ended up with a team of over 100 members and raised almost $28,000 by the time we had finished.

“It was an easy mission, in large part, due to the relationships that Jay had formed and nurtured over his lifetime. We had so many city employees volunteer to participate, and we also had former coworkers of Jay’s at the city of Durham join us as well. I think it was Jay’s openness with his diagnosis that moved so many people to participate.”

In addition to city employees, many private citizens who knew and heard about Reinstein also participated. Fayetteville’s Public Works Department fielded a team and raised $2,000 in Reinstein’s honor.

Reinstein and the Jay Walkers will be back for this year’s Sept. 7 Walk to End Alzheimer’s after a summer of fundraising. Reinstein reached out to Walmart corporate headquarters and was put in touch with the Ramsey Street Walmart store manager. As a result, the Jay Walkers were invited to fundraise over three weekends at the store. Through this team effort, the generosity of Walmart’s customers and a generous donation from Walmart, the Jay Walkers raised more than $6,500 toward this year’s team fundraising goal.

The Fayetteville Woodpeckers also hosted an Alzheimer’s Awareness night July 27 with $2 from the purchase of each ticket donated to the cause.

“This year,” said Broyles, “Elizabeth and I have been joined by coworker Cynthia Blot in serving as co-captains for the Jay Walkers. And, of course, Jay is hard at work as well. While we are (at) over 30% of our $40,000 goal, we are still hard at work planning other fundraising events. Look for us around town this summer.”

The Fayetteville Walk to End Alzheimer’s will begin at Festival Park Saturday, Sept. 7, at 9 a.m. It is open to everyone in the community. To sign up to participate and to learn more about Alzheimer’s, visit act.alz.org/fayetteville.

The Jay Walkers have raised more than 30% of their $40,000 goal. The group raises money to help end Alzheimer’s disease.