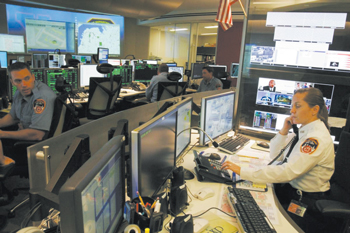 A drive past Cumberland County’s new Emergency Operations building reveals virtually no activity since it was purchased nine months ago. But the county says it is moving forward with plans for its new emergency services and 911 call center building. Officials submitted a grant application to the North Carolina 911 Board in May seeking funding for renovation, hardware, equipment and associated technology costs for the facility, which will eventually replace outdated facilities in the law enforcement center downtown. The new building at 500 Executive Place was purchased in November for $5.1 million. The 911 committees for the county and the city of Fayetteville had discussed colocating their separate call centers in the building with the intent of consolidating services in the future. The county sent an interlocal agreement approved by the Board of Commissioners on May 20 to the city but did not receive an official response.

“It’s time for us to move forward with this project without delay,” said County Commission Chairwoman Jeannette Council. She said that on behalf of the Board of Commissioners, she notified Fayetteville Mayor Mitch Colvin that county government would proceed to submit a grant application to the state without participation by the city. Assistant County Manager Tracey Jackson said at the time that a joint grant application would have been stronger.

A Robeson County man who confessed to taking part in armed robberies of three Fayetteville convenience stores was sentenced to 25 years in federal prison. The United States Attorney for the Eastern District of North Carolina, Robert J. Higdon, Jr., announced that Michael Devonte Hill’s prison term will be followed by five years of supervised release. Hill pled guilty to three counts of robbery, one count of discharging a firearm in furtherance of a crime of violence, and one count of being a felon in possession of a firearm.

A second man involved in the two of holdups remains at large. This case was part of Project Safe Neighborhoods, a program bringing together all levels of law enforcement, and the communities they serve, to reduce violent crime and make our neighborhoods safer for everyone.

Higdon said this initiative emphasizes the regional assignment of federal prosecutors to work with law enforcement and District Attorney’s Offices on a sustained basis in those communities to reduce the violent crime rate, drug trafficking, and crimes against law enforcement.

“This is such a wonderful grant for these kids, and the books that were available for the campers to choose from were wonderful,” said Joe Kabbes, camp director of Fayetteville State University’s STEM Summer Camp.

These programs offer children preschool age through high school opportunities to socialize and interact with peers.