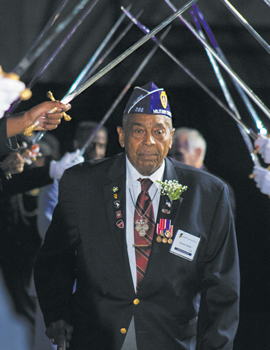 The presence of the military in our community is prominent and unmistakable; but far too often, the accomplishments and sacrifice of the individuals who serve this country, as well as their families, are neglected. Whether they are active-duty or veterans, the men and women who serve and who have served in the military deserve a resounding “thank you.” The Sandhills Purple Heart Committee is stepping up to applaud those brave men and women by hosting the third annual Purple Heart Dinner on Aug. 24.

“The Purple Heart is America’s oldest medal, established by George Washington to honor those wounded or killed in action against an enemy of the United States,” said Senior Vice Commander Barry Pearce, a representative of The Military Order of the Purple Heart. The first of the awards was given to three noncomissioned soldiers of the Continental Army during the American Revolution.  The order said, “Let it be known that he who wears the military order of the Purple Heart has given of his blood in the defense of his homeland and shall forever be revered by his fellow countrymen.”

After the American Revolution ended, the award fell into disuse until 1932, when the Army declared the restoration of the use for “persons who, while serving in the Army of the United States, perform any singularly meritorious act of extraordinary fidelity or essential service.” Moreover, the award would once again be used to recognize soldiers who acquired wounds in the line of duty that necessitated treatment by a medical officer “with an enemy of the United States, or as a result of an act of such enemy.”

The mission of the Purple Heart Dinner is “to honor those who have given so much. We are honoring true heroes and role models,” said Andrea Tebbe, the cochairman of the Sandhills Purple Heart dinner.  “Our purpose is to honor and thank Purple Heart recipients who shed their blood for our country, while also honoring Gold Star mothers and the families of those (killed in action).”

Gold Star mothers are those whose son or daughter dies while serving in the U.S. Armed Forces.

The Sandhills Purple Heart Committee understands the importance of showing support to the families of fallen soldiers and thus Gold Star mothers will also be recognized at the event. During World War I, families of service members flew service flags. The flag would have a blue star on it to indicate that the person with the flag had an immediate family member who was serving in the war. If the service member died in the line of duty, the blue star was replaced with a gold one as a reminder of the sacrifice the service member made for his country.

The first Purple Heart Dinner was held in 2009 in Wake Forest, and the initiative has since spread to seven other North Carolina cities and two other states. Since then, the numbers of attendees have continued to reflect not just the sacrifices of the recipients and their families but of the immense support for them from their communities.

There will also be a recognition of World War II Veterans.

In a community with a strong military presence, it comes as no surprise that there are several Purple Heart Chapters in the Sandhills area. “The one in Fayetteville is the Fort Bragg Chapter,” Pearce explained. Visit the website at http://www.purpleheartfortbragg.com/donate-to-the-bragg-moph-chapter.php for more information.

Pearce encourages the community to show its appreciation for the heroes who have sacrificed so much for their country. “If you know of a recipient, thank them for their service and sacrifice,” he said. “The volunteers of the committee believe it is important to recognize all they have sacrificed and what they have been through. (The dinner) is our way to say ‘Thank you,’ and ‘We support you.’”

While many ceremonies have a keynote speaker or several speakers,  the Purple Heart Dinner’s focus is on the honorees.

Most sponsors come from community business and families of recipients. Anyone interested in becoming a sponsor, though, can visit www.sandhillsphdinner.com or contact one of the committee members, also found on the website.

The Purple Heart Dinner will be held at the Crown Coliseum Expo center Aug. 24, from
5-8 p.m. The ceremonial dinner is open to the public for $25 per ticket. The Purple Heart recipient and two guests can attend for free.

To show support of those being recognized, people can sponsor the event on a number of levels, starting at $100 for the first level.

Visit https://www.sandhillsphdinner.com/ for more information on the event, purchasing tickets or becoming a sponsor.

The Sandhills Purple Heart Committee is hosting the 3rd annual Purple Heart Dinner on Aug. 24 at the Crown Coliseum Expo center from 5-8 p.m.