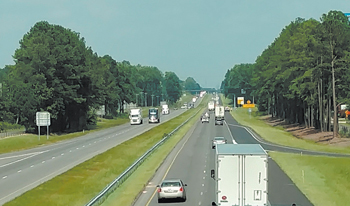 Development plans are underway on a proposed project to widen 25 miles of I-95 to eight lanes between Exit 56 in Cumberland County and I-40, Exit 81, in Johnston County, including all of Harnett County. Proposed work includes rebuilding at least six interchanges with new overpasses, loops and ramps. Additionally, service roads will be realigned or shifted to meet modern design standards. The portion of I-95 being proposed for this project has the highest traffic volumes in the state, reaching nearly 60,000 vehicles a day, according to a 2016 survey. The proposal should ease congestion and accommodate future growth in traffic along the north-south interstate. I-95 is also scheduled for widening to eight lanes in Robeson County and lower Cumberland County between mile marker 22 in Lumberton to mile marker 40. Construction of this segment isn’t scheduled to begin until 2028.

Dr. Roxie Wells has been elected to the American Hospital Association’s Board of Trustees. The term is for three years beginning Jan. 1, 2020. Wells is president of Cape Fear Valley Hoke Healthcare, where she manages Hoke Hospital and its associated outpatient clinics. She also serves as an associate chief medical officer for the health system. The Fayetteville State University graduate received her medical degree from East Carolina University’s Brody School of Medicine in Greenville. She Joined Cape Fear Valley Health in 2010 as a family practice physician at Stedman Medical Care. Wells’ work led to partnerships with Bladen County Health Department and EMS, as well as increased access to primary care services in the primarily rural county.

On the morning of July 22, Trooper Chris Wooten was seriously injured as a result of a collision in Charlotte. Wooten was pursuing a motorist on his motorcycle when he was struck by a truck. He has been hospitalized receiving around-the-clock care because of the serious nature of his injuries. He was recently transferred from Carolinas Medical Center in Charlotte to Shepherd Rehabilitation Center in Atlanta where his treatment process continues.

“The overwhelming amount of support offered by our law enforcement partners, medical staff, other first responders and the public is unmatched and truly expresses the appreciation for Chris’ law enforcement service,” said Colonel Glenn McNeill Jr., commander of the State Highway Patrol.

For those wishing to provide financial assistance to the Wooten family, an account under Christopher and Sharon Wooten Special Account has been established at the North Carolina State Employees Credit Union.

The Cumberland County Register of Deeds office received an International Association of Government Officials Innovator Award at the association’s annual conference held in Houston, Texas, in July. The Register of Deeds received the honor in recognition of technology upgrades to better serve customers. The upgrades include electronic recordings, online vital records, instant recording of real estate records, three marriage license kiosks and the ability to submit the date for a marriage license online.

“It is an honor for our office to be recognized by an organization that has members in most states across the United States as well as a number of foreign countries,” Register of Deeds Lee Warren said.

Hurricane season is upon us

Hurricane season is here, and Cape Fear Valley Health System has a jump on preparations, thanks to a new emergency water pump system. Costing nearly $380,000, the system went online in late July. It is located on Cape Fear Valley Medical Center’s campus and includes two new water wells and three large storage tanks. The upgrades were paid for by a grant from the Golden LEAF Foundation’s Disaster Recovery Program.

Cape Fear Valley sought to upgrade its backup water system in the aftermath of Hurricane Matthew in 2016. The storm knocked out water pressure to the medical center’s main campus for nearly a week, crippling services to patients. Bottled water was brought in by the truckloads for patients and visitors. The new system pulls water from new wells behind Cape Fear Valley Medical Center at a rate of more than 200 gallons per minute. The water is stored in three large 8,000-gallon storage tanks where it is filtered and treated.