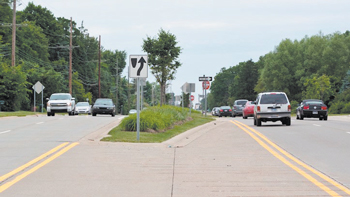 A North Carolina Department of Transportation highway improvement program in Fayetteville will likely affect local traffic for years to come. Planning and development are underway on a project to replace the center turn lane along Raeford Road with a median. The undertaking will involve more than 6 miles of Raeford Road between Old Raeford Road in West Fayetteville and Robeson Street in the Highland Village area. The nearly $150 million project will result in a roadway resembling Ramsey Street, which was reconstructed several years ago. DOT will reconstruct the road into what’s known as a superstreet design by replacing the two-way center turn lane with a raised concrete median or landscaped area. The superstreet design will result in the elimination of numerous cross streets, which will require motorists to turn right and make U-turns at signalized intersections.

DOT says the construction will be divided into three segments, beginning at the western end where Raeford Road intersects with Old Raeford Road. The section will include the area eastward to Bunce Road. The second segment of the plan will be from Bunce Road to the combined intersection of Glensford Drive and Hope Mills Road. The final segment will take the project through the in-town commercial district to Robeson Street.

Each segment will be funded separately as construction contracts are awarded. DOT said the road’s reconstruction will improve traffic flow and pedestrian access. The N.C. Board of Transportation is scheduled to fund the first segment in February with construction to begin in the spring of 2020.

The state said Raeford Road is one of Fayetteville’s most congested and dangerous routes. According to the Raeford Road Corridor Study’s final report in 2010, about 78% of the crashes occurred between intersections, a statistic that highlighted DOT’s safety concern of the numerous cross street and driveway openings along the route. The Raeford Road corridor has a higher-than-average crash rate because motorists must cross several lanes of traffic to turn left. There will be 11 directional crossover intersections. Crossovers allow traffic on Raeford Road to turn left while preventing side-street traffic from going straight across or making a left turn at the same location.

Other improvements to Raeford Road include adding a third travel lane westbound between Graham Road and Old Raeford Road and adding a third travel lane eastbound between Graham Road and Bunce Road. Sidewalks will be built on both sides of the road. As part of the project, the road’s T-intersection with Skibo Road, where traffic often backs up, will be redesigned. A new southbound exit ramp will be built from the All-American Freeway for motorists wanting to go west onto Raeford Road. The freeway’s existing southbound off-ramp will continue to be used to head east onto Raeford Road.

For more information, this undertaking is listed as Project U-4405 in the N.C. DOT’s State Transportation Improvement Program.

Planning and development are underway on a project to replace the center turn lane along Raeford Road with a median.