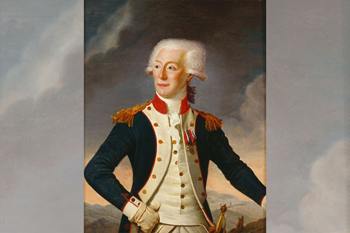 Fayetteville was the first city in the nation named for the French nobleman when the State Assembly combined the towns of Cross Creek and Campbellton in 1783. It is the only namesake city Lafayette visited, even though there are many communities named for him. Festivities begin Friday evening with “Arias and Artifacts” in Davis Memorial Library at Methodist University. Tickets can be purchased at City Center Gallery & Books at 112 Hay St. or by calling 910-678-8899. The Lafayette Trail Tour takes place Saturday at 8:30 a.m., starting with coffee and croissants at the Fayetteville Independent Light Infantry, 210 Burgess St. Guests will see places that Lafayette visited when he was here in 1825. Reservations are required. Call 910-678-8899. Saturday, the Museum of the Cape Fear Historical Complex will celebrate Lafayette’s birthday and the American Revolution with the annual Festival of Yesteryear: Revolution on the Cape Fear, from 10 a.m.-5 p.m., in Arsenal Park.

Ice hockey gets a boost at the Crown Coliseum

Capital improvement projects underway at the Crown Coliseum will add years of life to the facility. The Cumberland County Board of Commissioners approved approximately $4.6 million to replace the coliseum ice system and ice floor and replace and paint two parking lots. These funds were available from local food and beverage tax proceeds that must be utilized by law for costs associated with Crown facilities. The ice floor, which covers the entire performance area of the coliseum, and the ice floor chiller were replaced earlier this month. Old concrete and piping were removed, and new piping was installed along with 410 cubic yards of concrete. The concrete will need 28 days to cure and will be ready for use in mid-September. The new ice system is expected to provide more than 20 years of efficient ice-making capabilities.

Parking lot work to replace the Agri-Expo Center east parking lot and the Cooperative Extension parking lot is about 85% complete. Construction of the Crown Coliseum was completed in 1997. To see upcoming events at the Crown, go to crowncomplexnc.com.

One of the goals of the North Carolina Highway Patrol is to reduce teenage driver crashes. To accomplish this objective, the State Patrol has requested the assistance of the Cumberland County Schools system to inform parents of high school students who drive to school to be aware of the following issues: speeding; seatbelt usage; limited provisional license violations; Level II driver restrictions, which means one teenage passenger; and distractions such as texting while driving and cellphone usage. Troopers are patrolling the main thoroughfares and roads that feed into county schools during the first two weeks of the school year. Parents are urged to make their teens aware that enforcement actions will be taken for substantial violations of motor vehicle laws.

The Cumberland County Board of Commissioners has named the sheriff’s training center in honor of former longtime Sheriff Moose Butler, who retired three years ago. Sheriff Ennis Wright asked the board to name the training center for Butler. Sheriff Wright provided a petition signed by 14 current and former elected officials supporting the endorsement.

The building, located next to the Animal Control Center on Corporation Drive, is now the Earl “Moose” Butler Law Enforcement Training Center.

Butler served as Cumberland County Sheriff for 22 years, from 1994 to 2016. The state-of-the-art training center was built during his tenure. It has an indoor firing range, munitions room, lecture rooms, a driver training pad and other features. It was built using money forfeited by drug dealers who were arrested and successfully prosecuted.